Allyson Courchene Getsinger died early Sunday morning, Oct. 18, 2020, at home on Chappaquiddick. She was 66, and had struggled with cancer for the past 10 months. 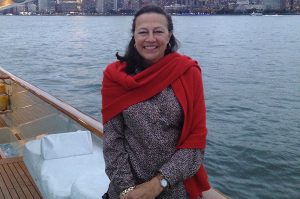 The wife of Peter Getsinger and mother of three, Allyson was a person of grace, beauty and unfailing optimism who made a deep impression on everyone she knew and met throughout her life.

She was born in Beverly, the oldest of three children and daughter of Fran and Nancy Courchene, who both survive her. At an early age, she demonstrated unusual talent as an artist and athlete while attending Beverly High School. She later attended Westfield State University.

During her childhood, her parents drove the family to New Hampshire on weekends, where they co-owned a cabin with several other Beverly families. The cabin had no central heating, an outhouse, and drew water from a nearby stream. Though the conditions were rustic, the experience had a profound and lasting influence in Allyson’s life when it came to the importance of family, appreciation for the outdoors, and a longtime love of skiing.

The family’s attachment to Martha’s Vineyard began in 1968 when Allyson’s mother Nancy was offered the job of managing the Country Store in Edgartown, a position she held for many years. After that, for Allyson growing up in Beverly was bookended by winter weekends in New Hampshire and summers in Edgartown.

In 1975, Allyson decided to take a break from college. She went to work as a stewardess with Air New England in order to save money and give some thought to what she and life could bring together. When she grew tired of flying in DC-3s and overnighting in Portsmouth, N.H., Nantucket, and Burlington, Vt., in 1976 she hopped into her Volkswagen Bug and headed out to Sun Valley, Idaho. Over the next five years, she variously was night manager of the Charthouse, a ski instructor, and catered on the side. During her years in Sun Valley, she developed into an expert skier.

In the fall of 1980, while back in Edgartown helping her mother close down the Country Store during the shoulder season, Allyson met her future husband, Peter Getsinger, a Chappaquiddick summer resident who was working in Paris at the time. Though still living out West, with the encouragement of her mother and friends, Allyson traveled to France to visit with Peter. With that visit their lives were changed forever. It took a while for Allyson to say yes, but in the end she did. They were married in September 1981 in Edgartown.

Allyson and Peter lived in Hampstead, England, where Peter had been transferred by Smith Barney in the spring of 1981. In London, Allyson cooked directors’ lunches at Jane’s Fighting Ships before graduating from Prue Lieth’s Cooking School, and gave birth to their older two children, Meghan and Gordon.

Eventually, they returned home to the States and resettled in Darien, Conn., where they lived for 24 years. Their third child, Emma, was born in 1993. A dedicated and loving mother, Allyson also remained active in volunteer work and became president of the Darien Community Association, the oldest nonprofit in Darien. Weekends were consumed with the children’s athletic activities, summers on Chappaquiddick at their family home, and frequent ski trips to Vermont and eventually Jackson Hole, Wyo.

Allyson distinguished herself as a superb cook, and was a consummate volunteer, and an incredible mother and wife. But the ski slopes were where her considerable talents shone the most brightly, with her deep love of the outdoors and athletic skills coming together in a powerful way. On skis she was dubbed the Zen Queen, and she was the impromptu ski instructor for the family.

In 2014, Allyson and Peter moved year-round to Martha’s Vineyard, where she continued to be active with local nonprofits, becoming vice president of the board at Featherstone Center for the Arts and serving on the annual benefit dinner committee of Sheriff’s Meadow Foundation, where their family took an active interest. She and Peter wintered in Jackson, Wyo., but otherwise remained residents of Chappaquiddick, where Allyson loved gardening, scalloping, painting, cooking, and visits to Slip Away Farm for weekly CSA pickups.

Above all, she was endlessly patient and thoughtful, with an optimistic outlook on life that was infectious. It was not unusual for people who met her to say, “I think she may be the nicest person I have ever had the good fortune to meet.”

In addition to her husband of 39 years, she is survived by her parents Nancy and Fran (89 and 100 years old respectively); her sister Andrea, brother Peter and his wife Madeline; her three children, Meghan, Gordon, and Emma, son-in-law Joe Codega and daughter-in-law Carly Getsinger; and two grandchildren, George Harold and Eloise.

A small, private family service will be held on Chappaquiddick sometime in the next few weeks, with a celebration of Allyson’s life planned for next June.

Donations can be made to Featherstone Center for the Arts, the Sheriff’s Meadow Foundation, or Hospice of Martha’s Vineyard.