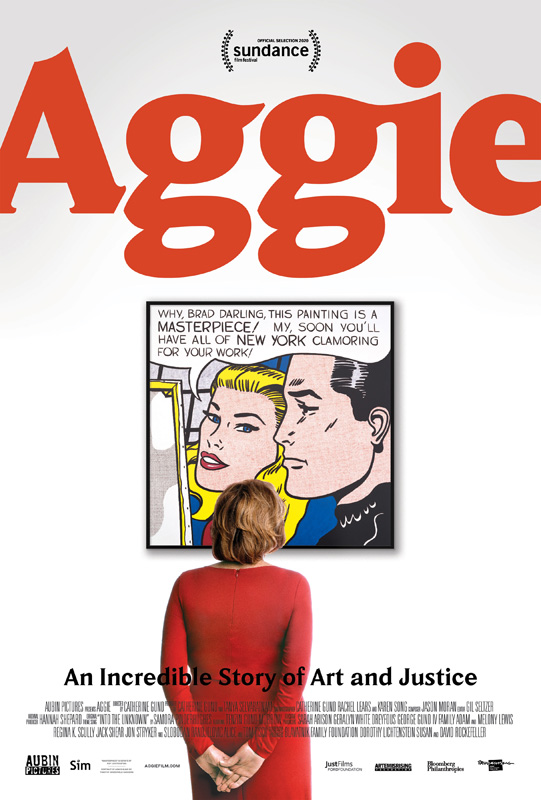 “Aggie,” a documentary about an extraordinary woman who collected and supported art as a patron and promoted it as an activist, opens at the M.V. Film Center on Friday, Oct. 30, and continues through the weekend on Saturday, Oct. 31, and Sunday, Nov. 1. Viewers with an interest in art will especially enjoy “Aggie.”

Aggie is the nickname for Agnes Gund, who served as president of the Museum of Modern Art from 1991 to 2002, and where she is now president emerita. The movie, titled by her name, is directed by her daughter, Oscar nominee and Emmy awardwinning Catherine (“Cat”) Gund.

Early on in “Aggie,” when asked by her daughter what she thought of the film, Gund responded with characteristic wit and modesty. She said, “I hope that the film will not be seen by too many people.”

Incorporating archival footage and graphics, the director combines her mother’s personal history with interviews with artists and admirers. In addition, she includes examples of Gund’s support of social issues involving the role of art. The shifts are sometimes jarring, but the individual parts are interesting.

Gund, now 81, developed her interest in art as a teenager at Miss Porter’s School in Connecticut, and at Connecticut College for Women. After she married, moved to Concord, Mass., and had four children, she divorced and started a new life, later marrying attorney and university instructor Daniel Shapiro. She received a master’s degree in art history at Harvard’s Fogg Museum, and moved to New York, joining MoMa’s Painting and Sculpture Committee.

Once her father died in 1968, Gund inherited a fortune and began collecting art. “Guilt — that’s why so many of my things have gone to museums,” she said in response to her wealth. “Guilt is something I have not been able to get over.” She made friends with artists, and has supported those who would go on to develop major careers, giving 1,000 works to the Museum of Modern Art. Her interests are diverse. She became friends with director John Waters, and encouraged the Museum of Modern Art to acquire his cult classic “Pink Flamingos,” (1972), starring drag queen Divine.

An early example of her activism involves New York City’s public school system. When in 1977 it decided to drop art from its curriculum, Gund founded and led the Studio in a School program to return art classes to the schools. Professional artists have since brought visual art education to almost 1 million children through different aspects of the program.

Asking, “Why are women artists less known and less admired?” she backed women’s art, in particular promoting their larger pieces. Another cause Gund took up was gay rights during the 1980s AIDS crisis. “I know you couldn’t get AIDS from picking up a needle,” she said at a time when people were afraid of contamination by those infected by the virus.

When asked how she would like to be remembered, she said, “for starting things that led to putting good ideas into people’s minds.” She also said it’s about standing up for your core beliefs, and considering other people as well as one’s self.

Gund is perhaps best known for selling Roy Lichtenstein’s painting, “Masterpiece,” for $165 million. After seeing the 2016 documentary “13th” by Ava DuVernay, about race and mass incarceration, she sold the work to start Art for Justice. This program brings about criminal justice reform, already helping to restore voting rights for 1.4 million of those formerly incarcerated in Florida.

Successful at combining art and activism, Gund received the National Medal of Arts in 1997 from President Bill Clinton, and was nominated to the board of trustees of the National Council on the Arts. She is a remarkable woman, and Gund’s daughter’s documentary is well worth watching.

Information and tickets to “Aggie” are available at mvfilmsociety.com.