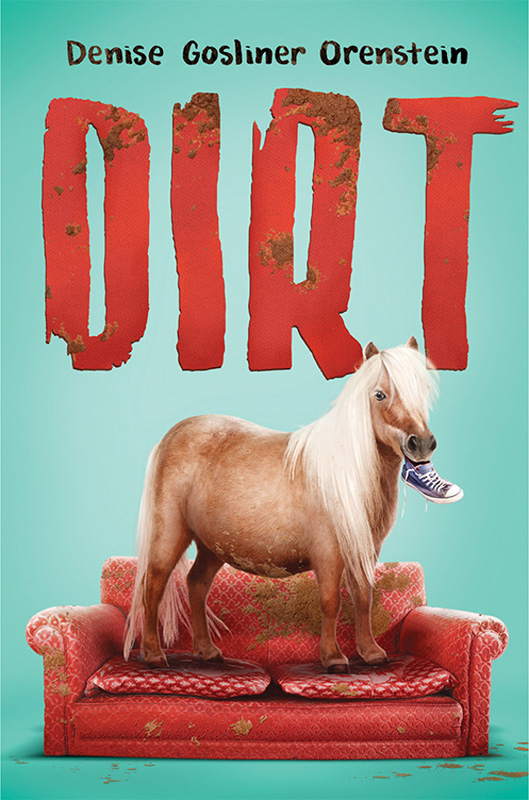 So, Dirt, for whom Denise Orenstein’s book “Dirt” is named, is a very special pony, and a bit of a character. Well, OK, a big character, but a little pony, since he is a Shetland. Although a one-eyed, drop-poop-anywhere, and eat-anything-not-nailed-down kinda guy, he is endearing for his deep connection with Yonder, the young protagonist in the story.

Orenstein, who divides her time between Northampton and Vineyard Haven, has a way with words in building Yonder’s unique “voice,” which is remarkable given that she hasn’t said a word out loud since her mother died four years earlier. Orenstein beautifully writes movingly about Yonder’s decision:

“Silence draped my little crooked house and the windows went dark. I crawled into quiet and decided to stay there. After all, words didn’t work. Did it really matter if you called out at night, all alone in your narrow bed: Bring her back. Please bring my mother back … Did it matter if you yelled at the top of your lungs until your throat hurt? It did not. It did not matter one bit. So, I decided not to speak. Silence seemed safer.” At the same time, for Yonder, “Voice is different than speech … It’s what you feel and mean instead of what you said. Your voice is who you really are, not what you pretend to be.” And addressing us throughout the story, Yonder touches us with what she has to say and the way she says it.

Yonder is told that she was so named by her parents “because there’s always something to learn, way up ahead, yonder. Always a surprise right around the corner, sometimes sweet and sometimes sad, but always a fork in the road that could change your life.” Orenstein takes us on a journey down Yonder’s particular road throughout the tale, from her initial decision to stay out of school after being wrongfully suspended even though it was she who was being bullied to the many initially fun and then suspenseful adventures she has with Dirt.

The two come together one rainy morning when Yonder, sitting on her steps in a downpour plays with opening and closing her eyes. Suddenly she sees “something furry and wide. Something coming close, then closer … The shape startled then stilled … Of course, I wasn’t dreaming at all, but simply coming face-to-face with the Shetland pony from up the road.”

Yonder and Dirt form a moving bond immediately. He’s affectionate when she’s down, and, for the most part, listens to her instructions, which reflects the strength of their connection given Yonder is speaking from inside her head:

“At first I could hardly believe it, that this misshapen critter could actually understand my thoughts, without my speaking them aloud. After all, I was a pretty logical girl with my feet planted firmly on the ground. I didn’t believe in magic, in the supernatural … So believing that a one-eyed, filthy pony could read my mind was quite a stretch for me … I certainly wasn’t an idiot, and knew that Dirt couldn’t really know what I was thinking because of some stupid hocus-pocus, but because he grew to know me.”

And although, as Yonder says, “a pony beast is not the typical companion for a mature 11-year-old,” their lives become entangled when Dirt’s owner decides, to Yonder’s horror, to sell him for horse meat. The rest of the book is Yonder’s pretty astounding efforts to save him. Initially, it’s by hiding him in her house. Amazingly, her father, who loves her tenderly, but is drunk most of the time in his overwhelming despair over losing Yonder’s mother, permits it.

But the social worker, who comes looking for Yonder when she doesn’t return to school after her suspension is up, is another story. This woman’s actions after discovering Dirt set off a string of challenging, even dangerous, circumstances that continually reflect Yonder’s determination to save him, no matter how far she has to travel to do so.

Yonder’s droll reflections in her ever-present “voice” throughout the story keeps her travails from ever becoming depressing. Orenstein says, “‘Dirt’ is a dark book, but our lives (as is demonstrated today) can be dark at times. One important message is that we can move past the darkness with individual generosity of spirit, courage, and determination.” She adds, “I’d like the readers to walk away with the idea that compassion can make a considerable difference in another’s life.”

This tale for young adults reflects a world where things are sometimes raw, but not demoralizing. For at its heart, the story is one of deep love, between father and daughter, and a daughter and horse, and the strength it provides for the hope of triumph against difficult odds.

Orenstein got the inspiration for this book from her real-life experience when, as the head of school for children with learning differences, she got a call from a rescue organization asking if it would take two Shetland ponies. She created a “pony curriculum” and discovered the confidence it brought to many of the students. Orenstein writes in her Author’s Note, “When no one hears what you say or understands the way you think, a fat pony with a gleam in his eye can make all the difference. ‘Dirt’ is a book for any kid who needs a friend, even if it’s a four-legged one.”