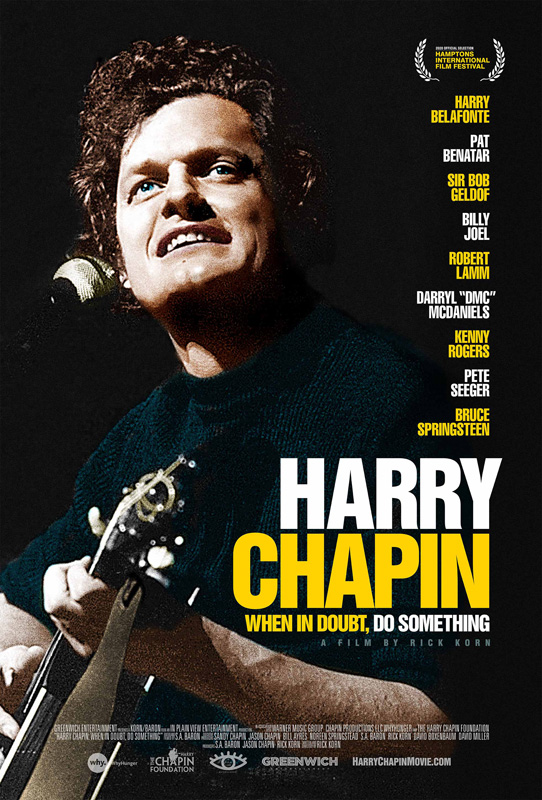 “Harry Chapin: When in Doubt, Do Something” comes virtually and to the theater at the M.V. Film Center on Friday, Nov. 6, and continues for two weeks. No one wrote and performed storytelling songs better than this celebrated musician and humanitarian. Writer and director Rick Korn’s documentary is the full-on story of his life, music, and humanitarian works, a good introduction for viewers who don’t know, or have forgotten, about him.

Born in Brooklyn Heights, N.Y., in 1942, Chapin grew up with a musical family. His father, Jim Chapin, was a celebrated drummer whom the singer didn’t see much of, and later wrote a song about. As a teenager, he sang with two of his six brothers, Steve and Tom, who had been choirboys at Grace Episcopal Church, as the Chapin Brothers. He was invited to go to Ethiopia, but once he returned, his brothers expelled him from the band. He went on to become one of the greatest solo storytelling singers of all time.

He started as a filmmaker, making the 1968 documentary “Legendary Champions” about boxing, and that year married his wife, Sandy Gaston, who collaborated on many of his songs. The film won him an Oscar nomination. Once he began to focus on music, he found success in New York nightclubs, including the Bitter End and Village Gate. By 1972, two major recording companies, Columbia and Elektra, launched a bidding war over him, and when he signed with Elektra, the contract was one of the major ones at the time.

Chapin recorded his first album, “Heads and Tales,” the same year. It sold more than 1 million records, and launched his international success, thanks to the hit single “Taxi.” It earned him the first of several Grammy awards.

In 1974, he released his fourth album, “Verities and Balderdash,” which, thanks to the celebrated single, “Cats in the Cradle,” became his most successful recording. This single is about a father who doesn’t find time for his son, who ends up being just like him. The song was inspired by his wife, and continues to have remarkable popularity 40-plus years later.

By 1976, Chapin became one of the most successful singers of the decade, as well as one of the highest paid. At this point Chapin began to turn his energies to humanitarian causes, founding World Hunger Year with former priest Bill Ayers. From this period on, Chapin devoted his life to ending hunger, giving hundreds of benefit concerts annually, often working with Ayers. He continued to make ending hunger the focus of his life, until his death in an accident with a semi-trailer at the age of 38.

Chapin was posthumously awarded the Congressional Gold Medal for his work on ending hunger. Among other humanitarian organizations, Chapin helped then President Jimmy Carter form the Presidential Commission on World Hunger.

Director Korn uses black-and-white photos, archival footage, and interviews with many of the stars who worked with Chapin, including Pat Benatar, Kenny Rogers, Pete Seeger, and Bruce Springsteen. “Harry Chapin: When in Doubt, Do Something” is a well-organized film that rightly focuses on Chapin’s work to end hunger, which continues today, long after his death.

Information and tickets for “Harry Chapin: When in Doubt, Do Something,” both virtually and at the Film Center, are available at MVFilmSociety.com.