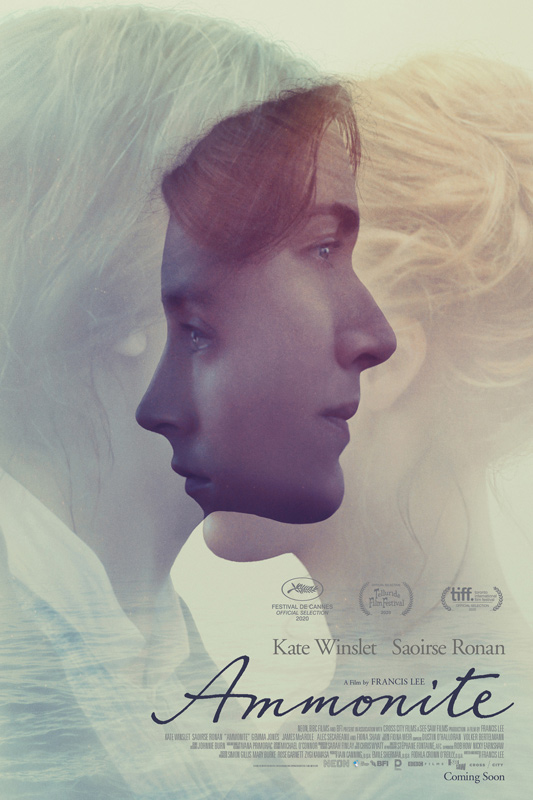 “Ammonite” arrives at the M.V. Film Center on Friday, Nov. 13. It is a grim but powerful story based roughly on the life of a real paleontologist, Mary Annings. Ammonite, for the uninitiated, is a coiled-shell fossil, in this case found in rocks along the shore in Lyme Regis, Dorset.

Yet this story by writer and director Francis Lee begins with a charwoman scrubbing a floor in the Royal Geographical Society building. Jump cut to two men carrying in a large fossil, an ichthyosaurus discovered by Mary Anning (a powerful Kate Winslet). Once it is put in place, the card attributing it to Mary is substituted for that of a man. From there “Ammonite” shifts to Anning lighting a candle and climbing into bed.

The use of these details illustrates the subtlety with which Lee approaches this 1840s narrative. The world of Mary Anning is both sexist and lower-class. The clothing — lace collars and bonnets — is accurate for the era, as Mary’s mother Molly (Gemma Jones) illustrates. Molly has a cough that signifies consumption, so the viewer is not surprised later when she dies. Mary is the last of 10 children, most of whom have died, and Molly mentions that her daughter hunts for rocks. It is a way of signifying Mary’s profession as a paleontologist, who searches for fossils along the coastline, as well as taking care of her mother.

Next the viewer sees Mary collecting specimens along the rocky shore, and understands the difficulties involved as she climbs a bluff and falls. Nevertheless, the rock falls, too, and contains the fossil specimen she’s looking for.

Mary sells her specimens to tourists, an illustration of the financially limited world she lives in. Into her life comes the affluent Roderick Murchison (James McArdle), and with him his wife Charlotte (a compelling Saoirse Ronan), suffering from depression from a suspected miscarriage, indicated when she fondles a baby held by a passing mother. Murchison makes clear his admiration for Mary’s expertise, takes lessons from her, and asks her to take care of his ailing wife. Again, the difference in class is indicated by his payment for this service. Then he somewhat casually departs.

Charlotte develops a fever, and is attended by a doctor (Eric Secareanu) but cared for by Mary. Mary purchases a salve from an aristocratic Elizabeth (Fiona Shaw), who gives indications of a previous, possibly erotic relationship with an unreceptive Mary. For the first time, the viewer sees Mary touch Charlotte, rubbing the salve on her back and chest, a forerunner of what is to come. Once Charlotte recovers, her upper-class incompetence is shown when she spills a bucket of coal Mary has asked her to bring inside, but later she follows Mary onto the beach. Small signs, like Charlotte removing her socks and showing her bare feet and removing her wedding ring, anticipate their future liaison.

Mary’s sexual relationship with Charlotte begins when Mary shares a bed with Charlotte. Soon a kiss follows, and the film opens up with the passionate coupling of the two. It continues until a letter comes for Charlotte from her husband, and she returns to him. The viewer watches as Mary walks away from the carriage in which Charlotte departs. Eventually Charlotte invites Mary to come to London for what Mary believes will be a visit. The viewer sees Mary rush to catch a boat and then struggle through the crowds to Charlotte’s house. These moments provide another marker of Charlotte’s wealth and aristocracy, especially when at first Mary is told to go to the servant’s entrance.

Lesbian relationships were strictly taboo in the 19th century, and in the case of Mary, take second place to her commitment to paleontology. But in Mary’s case both her gender and her class foreclose the possibility of success and acceptance in this field dominated by a predominantly male world. Although the ending comes a bit abruptly, “Ammonite,” supported by a first-rate cast, successfully conveys a story that needs to be told.

Information and tickets for “Ammonite” at the M.V. Film Center are available at mvfilmsociety.com.