When Doris Virginia Toll Andrews Gregory succumbed to cancer at Windemere Nursing and Rehabilitation Center on Oct. 31, 2020, she was 17 days away from her 96th birthday. She was a modest person who lived a quiet life; she died the same way, slipping away peacefully. 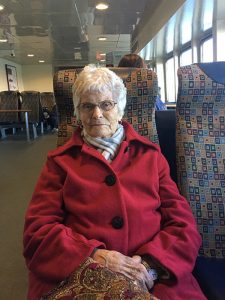 She was born in Chicago, Ill., to John and Ruth Toll on Nov. 17, 1924. Her parents, both immigrants from Sweden, met and married in South Dakota, then moved to Chicago. The Tolls had two other children, Lorraine and John.

In a 1965 interview, Doris described an almost idyllic childhood. In her close-knit family, her mother cooked and sewed clothing for the children; her father worked outside the home. Weekends were spent together, sometimes with other Swedish families for community activities. Often, the Sunday dinner her mother prepared was packed up and the Tolls would drive to a forest preserve outside the city to enjoy the meal. In the summer, the family traveled to Lake Michigan by streetcar. Later, when the children were older, they would ride bikes to the lake.

Doris grew up during the Great Depression, but her family did not suffer as so many families did. “We had everything we needed, plus I was young and didn’t understand. We bought and held on to a home somehow … how we accomplished that I will never know,” she said. She remembers that her father bought a coal stove for the kitchen because it was cheaper than using the furnace.

Doris found lots of playmates in her neighborhood, and activities involved writing plays and performing them on someone’s front porch. While Doris enjoyed these amateur theatricals, she truly loved the movies. Jean Harlow was her favorite actress, “for her beauty.” Doris cut out pictures from movie magazines to make scrapbooks of the stars of her day. “Movies back then cost only a dime, and were only in black and white,” she recalled.

When she was a senior in high school, the students were sent to the auditorium to hear President Franklin Roosevelt declare war. The day before, as the family was enjoying supper at the home of friends, news of the attack on Pearl Harbor had been announced by a newsboy shouting, “Extra, extra!” outside in the street.

After graduating from high school, Doris was employed as an office worker. It was 1943 when Howard Andrews of Martha’s Vineyard caught sight of her, a quiet 19-year-old with movie-star good looks. He was a Marine, and very handsome, stationed stateside after a stint in the South Pacific, and was smitten. They married two years later, and moved to the Carolinas, where he was posted after the war. They moved to the Island a few years later when she was expecting their first child. Wendy was followed by Melanie and Billy.

Doris and Howard divorced in 1962. She moved to Florida with the two youngest children, to be close to her parents. Soon after, she met her second husband, Jack Gregory. They moved to the island in 1986. Doris worked as a bookkeeper at DaRosa’s Printing, retiring from that position in her 70s. She divorced a second time, and never remarried.

Doris gave her time and talents as a volunteer over the years. She held a position on the Girl Scout Council of M.V., traveling to conventions as far away as St. Louis; served as treasurer of the American Legion Auxiliary, as well as Christ Methodist Church of Vineyard Haven; she was a receptionist at the Tisbury Council on Aging, and volunteered at the Vineyard Haven library and for 20 years at Windemere.

She was an avid reader of lighter fare, loved gardening, especially raising peonies, and could get an orchid to rebloom. She learned new skills through the Dukes County Extension classes. After retirement, she learned to play mahjong.

She loved traveling, both in the U.S. and abroad. She made numerous trips with her sister and other family members to visit aunts in Sweden; she understood Swedish, but never spoke it. She enjoyed cruises, a high point being a trip through the Panama Canal.

Closer to home, she enjoyed church suppers at Christ Methodist in Vineyard Haven and Trinity Methodist in Oak Bluffs, where she was a member. Eating out with friends was a welcome event, from dining on liver and onions at Linda Jean’s in Oak Bluffs to catching the early-bird special at the Ocean View with her friend of 70 years, Betty Welch of Vineyard Haven.

“We went out to eat at least three times a month,” said Betty. “I don’t drive, so Doris would pick me up, and off we’d go. Doris was not a gossip, and was a very private person, so we talked about other things. She was very honest, a sweet girl, genuine and always gracious. She was a wonderful housekeeper, could cook the best quiche, and was a great seamstress. Made a lot of her own clothes.”

Doris is survived by children Wendy Andrews of Vineyard Haven and her son Thad Gessel; Melanie and her husband Tony DaRosa of Oak Bluffs and their children Erin DeBettencourt, Erika Bettencourt, Eliza Dolby, Eve Budkins, Emily DaRosa, and Toni Emin; William and his wife Margaretta of Nantucket and their children Maggie Andrews and Sarah Winters. Doris was the great-grandmother of 18. Her passing is also mourned by her sister, Lorraine Smith, of Seminole, Fla. She was predeceased by her parents and her brother John, who died in a tragic boating accident when he was 21.

She was cremated, and her remains will be buried in Vineyard Haven’s Oak Grove Cemetery. Her burial plot was given to her as a present for her 90th birthday; she was thrilled with the gift.

Chapman, Cole & Gleason Funeral Home is in charge of arrangements. Please visit the website at ccgfuneralhome.com to leave messages of condolence and memories of Doris. Interment will be private.

Oak Bluffs: Giving thanks to teachers