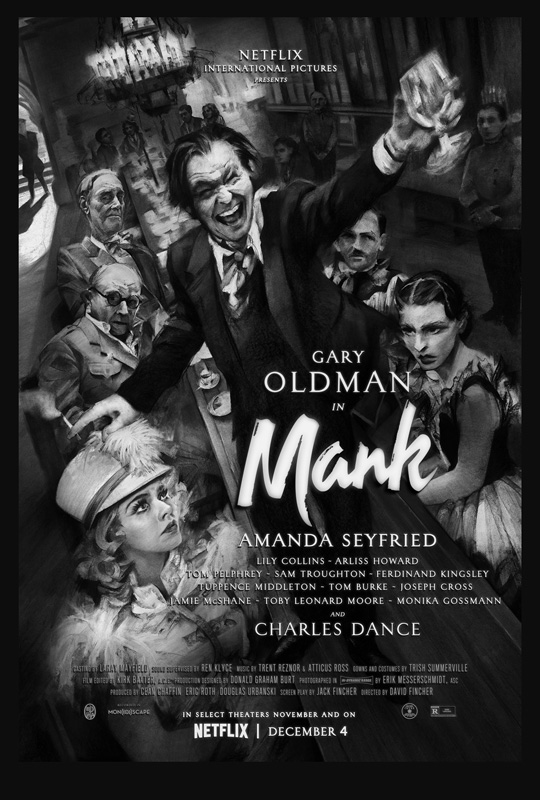 Coming to the M.V. Film Center on Wednesday, Nov. 25, the day before Thanksgiving, is “Mank.” The puzzling title comes from the nickname for Herman Mankiewicz, and the film narrates the progress of his writing for the legendary 1941 “Citizen Kane.” The script for “Mank” was written in the 1990s by Jack Fincher, who died in 2003. His son, David Fincher, directed this film about the battle over who actually wrote the screenplay for “Citizen Kane.” After its Nov. 25 opening, it will be released virtually on Netflix Friday, Dec. 4.

The story begins with an alcoholic Mank, as he is called, under the gun to finish the script and recuperating from a broken leg at North Verde Ranch outside Los Angeles. Mank is played by Gary Oldman, who may well earn an Oscar for his tour de force.

The film, shot in black and white, switches back and forth between Mank, recovering from an auto accident, to the accident, and then to the heyday of the earlier 1930s studio system. Mank first meets and then enjoys the company of Marion Davies (Amanda Seyfried), the lover of media mogul William Randolph Hearst (Charles Dance). She first appears on an arresting giant wooden pyre, and Hearst is the stand-in for Charles Foster Kane in “Citizen Kane.” Mank becomes a guest at Hearst’s San Simeon mansion, a.k.a. Xanadu, and hobnobs with the likes of Hollywood boss Louis B. Mayer (Arliss Howard) and Irving Thalberg (Ferdinand Kingsley).

Viewers watch as Hearst uses his power for political influence. The film illustrates this in the defeat of Upton Sinclair’s 1934 California gubernatorial campaign to beat a Republican, reminiscent of today’s politics.

A 24-year-old Orson Welles (Tom Burke), given carte blanche to direct his first Hollywood movie, hires a recovering Mank to write the script for “Citizen Kane.” The challenge is, Can he finish writing the script, or will he disintegrate into an alcoholic daze?. He has what he needs in the form of a secretary (Lily Collins), his German nurse Freda (Monika Gossmann), and his editor, John Houseman (Sam Troughton), a tender to keep him, unsuccessfully, from drinking and on track. It is Freda who references Mank’s support for the escape of German Jews during Hitler’s rise to power.

In “Mank,” director David Fincher has created a rich world of the Hollywood studio system at the time, as well as Hearst’s Xanadu, with its exotic zoos and elegant dinners. Headed by Oldman and Seyfried, the cast is stellar. Mank’s alcoholism is beautifully captured by a scene where, lying in bed, he drops a bottle of booze onto the floor. Although the flashbacks to the ’30s can be dizzying, the film’s black-and-white format is appropriate to the era, and the dialogue crackles in a way typical of Hollywood at the time. Viewers interested in the history of the era will especially enjoy this expertly constructed film.

Information and tickets for “Mank,” both at the Film Center and online, are available at mvfilmsociety.com.