Miriam S. Frankel, long-time seasonal resident of Lambert’s Cove, died in Sarasota, Fla., on Nov. 16, 2020, of complications from a fall. 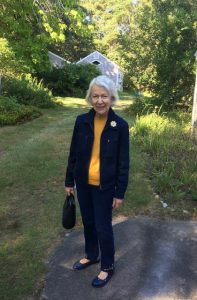 “Mimi,” as she was known to friends and family, was a familiar frequenter of Lambert’s Cove Beach, where she loved to walk, swim, and meet new people. She had an artistic flair, which she expressed through knitting and crocheting, creating pressed-flower and seaweed pictures, arranging fresh flowers, and improvising delicious dinners and desserts without a recipe. Even the way she dressed was an expression of this artistry. Mimi also enjoyed the arts, attending the ballet, concerts, and art exhibits with friends.

Born in Boston’s West End neighborhood on June 24, 1926, Miriam was raised in Brookline, and spent wonderful summers in Marblehead. She attended Girl’s Latin School, and graduated from Radcliffe College with a degree in psychology.

She married neurosurgeon Saul Frankel, to whom she was introduced by her sister Bunny, on what she described as “a crystal-clear August day” in 1947. Following their marriage, the couple moved to New Haven, Conn., where Mimi worked at the Yale Child Study Center while Saul was an Army surgeon in Korea. Later, they raised their three children and two golden retrievers in Woodbridge, Conn.

In 1963, the family began summering on the Vineyard, first on Beach Road in Eastville, and later in Lambert’s Cove, where they purchased the old Tilton house in 1973.

In later years, Mimi and Saul took many wonderful trips together to China, Japan, Cuba, the Netherlands, and other beautiful places.

Mimi is survived by daughters Katherine Parker and Barbara Frankel of New York City, son David Frankel of Bellingham, Wash., grandsons Samuel and Jonathan Frankel, and several nieces and nephews. She was predeceased by her brother, Joseph Stern, and sister, Bernice (“Bunny”) Wallace, both of Boston.

She will be buried at Lambert’s Cove Cemetery on Sunday, Nov. 22, at 1 pm, next to her beloved husband Saul, who predeceased her in 2009. Friends and family are welcome to attend the graveside service, where social distancing standards will be respected. Mimi’s family may be contacted with recollections of her life at ccgfuneralhome.com/obit/miriam-s.-frankel.

Donations may be made in her memory to Hospice of Martha’s Vineyard, Vineyard Conservation Society, or Featherstone Center for the Arts.