William Herbert Dyer (“Bill”) died on Nov. 15, 2020, at home surrounded by his family.
He was born on June 11, 1937, in Springfield, to Margaret and Edwin Dyer. When he was 7 years old, his family moved to Otis. Bill spent his youth in the woods and streams of Otis, with his brother Eddie and good friend Walt Neff. He graduated from Lee High School in 1955, and attended the University of Vermont for several semesters. 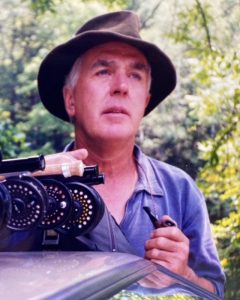 Bill met the love of his life, Diane Leibowitz, at the Otis Friday night square dances. Diane and her family lived in Brooklyn, N.Y., but spent most weekends at their cottage in Otis. Bill and Diane were married on March 5, 1960, at Jug End Resort in Egremont. Bill worked at NCR (National Cash Register), living in Westfield and Ohio until 1965 or so, when he and Diane moved to Otis permanently to raise their family. Bill started his own excavation business, Dyer Excavating, which he ran until just last year.

Bill was well-known throughout Otis and the area for his kindness and generous soul. He would help anyone, at any time of the day or night. There are many people who considered Bill their second father.

But most of all, Bill loved his wife and children and grandchildren. He adored them all, and would do anything for them. Bill leaves his wife of 60 years, Diane; along with his children, Steven Dyer (Sherry) of North Durham, N.C., Gregory Dyer (Kathy) of Otis, Jennifer Windram (Chris) of Housatonic, and Hillary Howard of Housatonic. Bill leaves grandchildren Ethan Dyer, Zackary Dyer, Hunter Dyer, Sophia Howard, Jay Howard, Larkin Howard, and Marshall Dyer. Bill also leaves his older brother, Edwin Dyer, of Ashville, N.C., along with brother-in-law Bill Riiska; sister-in-law Lee Hawley; and former son-in-law Mike Howard. Bill was predeceased by his parents, Margaret and Edwin Dyer, his sister Barbara Riiska, and his infant son, William Jeffery Dyer.

Due to COVID, there will be no calling hours or funeral for Bill Dyer at this time. The family will plan a memorial for Bill at a later date. In lieu of flowers, donations may be made in his name to Hospice Care of the Berkshires, in care of the Kelly Funeral Home, 3 Main St., Lee, MA 01238.