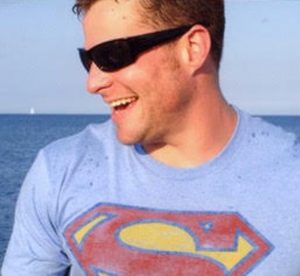 The son of Margaret-Love Gathright Denman and William T. (“Rusty”) Denman III, Hunter was the youngest of their five children. Born in New Orleans, La., Hunter grew up in Mississippi and North Carolina, graduated from Oyster River High School in Durham, N.H., but found a true home on Martha’s Vineyard, where he had lived since 2006.

A lover of the sand and sea, Hunter became an avid kiteboarder and kayaker in recent years. He was also a deeply spiritual and treasured inspiration to an extensive community of friends. His appetite for life was infectious; he approached situations with a childlike enthusiasm, bringing light and laughter to those who knew him. While he loved the outdoors, he also had an artistic side, often expressing himself through music and song.

A private service will be held for his family and close friends on Saturday, Nov. 28. In lieu of flowers, donations of support can be made to Vineyard House online at vineyardhouse.org/donate-now, via phone at 508-693-8580, or by mail to Vineyard House. Inc., P.O. Box 4599, 56 Short Hill Road, Vineyard Haven, MA 02568.