There were four school districts in Edgartown at the time of the American Revolution: “Pohoganut,” the Plains, Chappaquiddick, and Edgartown village. In 1837, a statewide survey overseen by educational reformer Horace Mann reported six public schools and 13 private schools in Edgartown, serving 330 scholars. There were a total of 10 predominantly male teachers employed by the public schools at that time — five for summer and five for winter — overseeing five classes of 52 students each, for 10 weeks per class per year. (Students under 7 attended “female private schools;” older students only attended a total of 10 weeks of schooling each year.)

By 1850, there were eight public schools (together with seven private schools) in town, including Clevelandtown, Farm Neck, and two downtown schools: the South School, at the corner of High and School Streets (later home of the Edgartown Boys’ and Girls’ Club), and the North School, on the corner of Pease’s Point Way and Planting Field Way.

The modern and spacious “Union School” was built in 1925 on the West Tisbury Road, and both the North and South Schools were permanently closed. The North School became the Carol Apartments under the ownership of Arthur Young, and today is the Edgartown Commons hotel.

And those mills? There were reportedly four windmills in Edgartown, including one on Chappaquiddick, and were grist mills employed to grind corn. One stood in the vicinity of the modern water standpipe at the top of Mill Hill Road; another may have stood near the corner of Katama Road and South Water Street.

One of the last-built grist mills — probably the one on Chappaquiddick — was owned in part by Perry Davis of Providence, R.I. Davis was the successful entrepreneur behind Davis’ Vegetable Pain Killer, an internationally popular elixir of alcohol, highly addictive opioid narcotics, camphor, and vegetable extracts, which some say were first manufactured on Chappaquiddick in 1840. The Rev. Henry Baylies of Edgartown would later deride Davis’ windmill as “new-fangled and unsubstantial,” adding, “I think he succeeded better as the pain-killer than the wind-miller.”

The oldest of Edgartown’s last windmills, and probably its longest-lived, was the one for which Mill Street was named, on Planting Field Way. Writer Eleanor Mayhew described it as standing “handily by on the little knoll back of the schoolhouse” — a reference to the North School — on “the old Proprietors’ road to their cornfields.” This mill dates from colonial times, and was known as “the Jernegan Mill” or “the Hill Mill” (not to be confused with the other windmill on Mill Hill). It was originally owned by Samuel Osborn Jr. (1711-1753).

William Jernegan (1728-1817) owned the Hill Mill next. An Edgartown native, his father died in Jamaica just a few weeks before his birth. He left school at age 10, and before he turned 12 his mother remarried and moved off-Island. “At twelve years I was apprenticed to Mr. Samuel Osborn, housewright,” he later wrote, “my mother being married to a second husband, and removing to Connecticut, I being left at the Vineyard in the 12th year of my age, fatherless, motherless, without brother or sister — all of which was no small trouble and grief to me, and often broke me of my rest.” Osborn soon became his father-in-law as well as his boss, and bequeathed him the mill.

Jernegan became a wealthy and powerful Edgartown gentleman, businessman, and politician, serving a year in the Massachusetts State Senate. He married again late in life, and fathered his youngest child when he was 67 — Richard W. Jernegan (1795-1870), who inherited the old mill upon his father’s death. “The ancient wind mill, near the Grammar School, survived many generations,” wrote the Rev. Baylies, “wore out its grinders, had its arms torn out of their sockets, lost its circumlocution, so that it could not longer turn its eye to the wind, shrieked and groaned with the burden of more than a century.”

Richard spent his life laboring at the Hill Mill, and also worked as the Methodist church sexton. It was his job, before Edgartown installed a town clock, to ring the church bell three times daily: 7 am (6 in the summer), noon and 6 pm. In 1869, he fell down the stairs of the mill and was paralyzed. He died soon after. His epitaph in the Old Westside Cemetery in Edgartown reads, “Resting Watching Waiting.”

The mill was torn down in 1870. For many years, its two huge millstones were used as doorsteps to the Historical Society’s Cooke House. Later, the Santos family — Elmer, Johnny, and Lillian — occupied the new house built at the site of the mill. 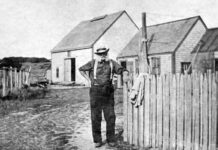 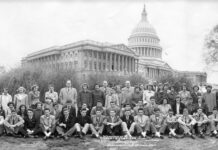