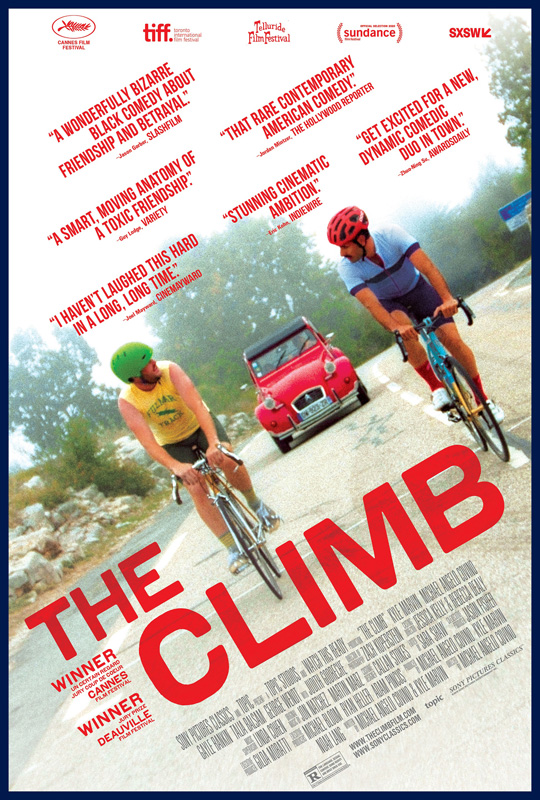 Written, directed, and starring Covino as Mike, it starts out with a bike ride in the French hills by the two friends. “The Climb” is structured around a series of chapters that allow the film to shift in time and scene, and relies on absorbing, often witty, conversations between the two. Mike, the more experienced rider of the two, confesses to Kyle (Kyle Martin) that he’s slept with his friend’s fiancée Ava (Judith Godrèche). Though he is the more sweet-natured of the two, Kyle is, of course, livid, threatening to kill his best friend, and dumping him as best man.

In the meantime, an auto driver leans on his horn, and as a result Mike gets in a fight with him. It’s the first of numerous fight scenes, but it renews Mike and Kyle’s friendship — temporarily. Mike ends up in the ER with injuries that prove only muscular, but when Ava arrives, Kyle discovers them kissing passionately. That would seem to end the friendship. It certainly ends Kyle’s relationship with Ava.

Chapter 2 is where the comedy really begins. The setting is Ava’s funeral, and Mike, who has married her, is the bereaved. With their friendship restored, Kyle is in attendance. At the funeral’s end, Mike wants to shovel the traditional dirt on the coffin. The gravediggers, citing union requirements, refuse to let him use their shovel. A tussle ensues, with Kyle coming to Mike’s defense. Their altercation is the start of one funny scene after another.

Cut to Chapter 3, and a Thanksgiving that Mike has been invited to without Kyle’s knowledge. George Wendt of “Cheers” fame appears as Kyle’s turkey-carving dad. Each chapter offers a new twist to Mike and Kyle’s friendship. Marissa (Gayle Rankin) is introduced as Kyle’s latest squeeze. Meanwhile, a glum Mike brings in a load of wood for the family, does a pole dance, and ends up passing out. He’s wearing his old football helmet, and pulls over a Christmas tree in another silly scene.

Chapter 4 begins with the two pals on a ski lift with Marissa. When the viewers find Mike with a broken arm and Kyle in bed asleep, they see Marissa as Mike’s next conquest. In a scene with Mike and two friends fake-attacking Kyle, Chapter 5 moves to Mike and Kyle ice fishing. Mike confesses to sleeping with Marissa, then rescues Kyle, who has broken through the ice. Mike is not sure how much Kyle has heard, so the friendship remains.

The setting for Chapter 6 finds Kyle at his wedding to a pregnant Marissa. Mike arrives late and protests the marriage. “You deserve to be with someone who loves you,” he announces to a stunned audience, and the minister delays the wedding until after the baby is born. In a later scene, Marissa enters a bike and coffee shop and tells Mike, “He misses you.”

In the final chapter, Kyle and Marissa are getting divorced. Mike is there, helping Kyle to carry out a box of his dishes, which drops and breaks. As the two drive off, Kyle’s son races after them, and “The Climb” ends with Kyle and Mike still pals. In the final scene, Kyle proudly watches his son ride a bicycle without training wheels. The moral of this comedy: The friendship of these two pals wins out.

Information and tickets for “The Climb,” playing at the Film Center, are available at mvfilmsociety.com.