We have had three generations of Labs since 1990. The first two were males, father and son, and the last was the granddaughter of the first. She is still with us, now 14, and while she has slowed down, lost much of her hearing, and doesn’t run or bark like she used to, there is still one situation where she reacts almost exactly like her father and grandfather before her.

Anytime my wife and I hugged while standing in the kitchen or elsewhere, the dogs would bark loudly, even aggressively, wag their tails, and run over to us. The first two males would try to get their nose between us. I would often bend down to them and rub their heads and essentially  bring them into our circle. Bela, our current Lab, barks, wags, and comes over, but does not try to get her head between us. She’s happy to be close, but still seems “unhappy” we’re hugging.  The act of hugging prompts her to get her old tired body into action!

There was never anything threatening about their behavior (they are, after all, Labs) but it was almost like they were jealous of our being affectionate to one another.

I have asked various vets about this, and so far no one seems to have an answer. Any ideas? Thanks for any thoughts. This has been perplexing us for more than 30 years!

My guess is the great, great majority of dog owners, including me, have had similar experiences when hugging a significant other. Signs of affection from dogs to dogs are soft squinty eyes, soft mouth and ears, the wagging tail, the play bow, and often mellow growly sounds. Dogs do not hug as a sign of affection, and for the most part are not thrilled when we hug them as we do our children and each other. They basically tolerate our hugs, but given enough time and the “right” temperament and the “right” hugger, some dogs will come to appreciate, or even like, being hugged.

I think perceiving the dog’s response as jealousy is anthropomorphizing. What Bela and most dogs perceive when their beloved two-legged pack members are hugging is potential conflict, which is what elicits the dog’s interference. Getting between you guys and jumping up is not wanting to be “included,” but rather trying to break up a potential fight. The barking is an attempt to distract you from being aggressive with each other.

My suggestion to redirect Bela from trying to de-escalate your perceived conflict is to have treats at the ready, and call her over telling her to sit and giving her a treat just as you and your wife start hugging each other, slipping her more treats as long as she is cooperative. If the treats are timed correctly, Bela will look forward to your displays of amorous touchy-feely. 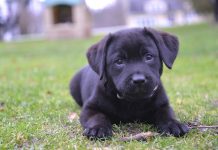 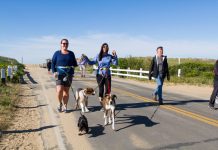 Dogcharmer: Keep calm and carry on 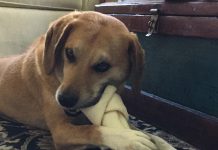