“Think like your prey,” say the hunters and fisherpeople. It’s good advice for naturalists, too.

I can’t say it has helped me with fishing. The average striped bass, I’ve reluctantly concluded, is smarter than I am. I can only imagine how hard the deer would laugh if I ever tried to hunt them.

But insects? As deficient as my central nervous system may be, it’s a match for that of any arthropod. “Thinking like a bug,” I’ve learned I can find insects even when conditions seem too bleak for promising hunting.

A late November outing took me to Little Pond, the modest groundwater basin adjacent to the headquarters buildings in Correllus State Forest. The temperature was in the upper 40s — debilitating or at least challenging for most insects — but the year’s drought had lowered the water in the pond, exposing a broad band of prime, skanky mud. A veritable supermarket, I figured, for detritus-eating flies!

Better still, the low water had exposed a row of rocks along the north side of the pond, where it looks like somebody once tried to stabilize a section of shoreline. Fully exposed to the sun, sheltered from the brisk west wind by topography and vegetation, those rocks looked positively toasty. I made a beeline for them; the combination of a robust food source and a balmy microclimate would be irresistible if I were an insect.

Fly number 1, a good-sized specimen, was visible from 20 feet out and identifiable through binoculars as it perched on a sun-warmed rock: Eristalis tenax, an introduced species of hoverfly. The larvae of Eristalis are aquatic, with a fondness for murky, nutrient-rich water, so the presence of this species at Little Pond came as no surprise.

As I crept closer to the rocks, they proved to be liberally sprinkled with tiny, basking flies, dozens of them, about the size of rice grains. Even through binoculars, I couldn’t see much detail, but the date and location convinced me that something interesting must be going on. I unslung the camera and got to work.

Reviewing photographs in the viewfinder, I quickly concluded that multiple species were present, differing slightly in size, shape, and coloration. The tiny viewfinder images didn’t tell me much, but I figured I’d save the ID work for later. I rang up about 150 images on the memory card over a half-hour of stalking, then headed home.

Fly number 2 was a puzzle, with few distinguishing marks. I figure it’s probably in the family Scathophagidae, closely related to the common house fly. It does feature broad, white palps — sensory organs next to the mouthparts — that may prove distinctive enough to eventually lead to an ID. But for now, this unfamiliar insect remains only tentatively classified.

Fly number 3 went a bit more easily. This species showed long, densely spined legs, hints of metallic sheen on its thorax, and a distinctive, head-elevated posture — characteristics that add up to the family Dolichopodidae, known familiarly as long-legged flies. An active, predatory family, Dolichopodidae is a tough one for identification, but clearly I had found one of the many species in that family that specializes in wet habitats. While I can’t put a name to it, comparison to my existing photos of this family show that this species was a new one for me.

It was fly number 4 that really excited me. Its odd head shape — a broad head with the eyes widely spaced — pointed to Ephydridae, or shore flies: A family I had never recorded on the Vineyard. This particular species featured bulbous tibia on its front legs — analogous to massively muscled human forearms — and robust, backward-pointing spikes where your wrists would be. These structures, suggesting the forelegs of a praying mantis, were clearly adaptations for grasping prey. And they marked this fly as a member of the genus Ochthera.

Ochthera evidently has a penchant for preying on leaf hoppers, which as a group average about as large as this fly! One source notes helpfully that the large spines on Octhera’s front legs can be used for excavating prey out of the soil. An elegant insect and clearly a fearsome, versatile predator for its size, this was a delightful late-season find.

So there you have it. Despite the chilly air, “thinking like a fly” brought me to four fly species (plus whatever I overlooked!) in four different families. Three of the species, whatever they may be, are new ones for me, and one is in a family that I had never before found on Martha’s Vineyard. Pretty fair diversity for the end of November.

“A man,” to quote a character played by that eminent philosopher, Clint Eastwood, “has got to know his limitations.” That’s also good advice. I’ve given up on slaying the wily striped bass. But I’ve adjusted my expectations! Matching wits with flies is more my speed. 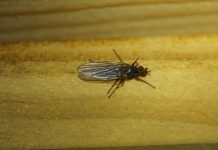 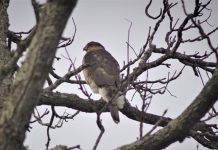 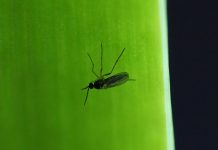