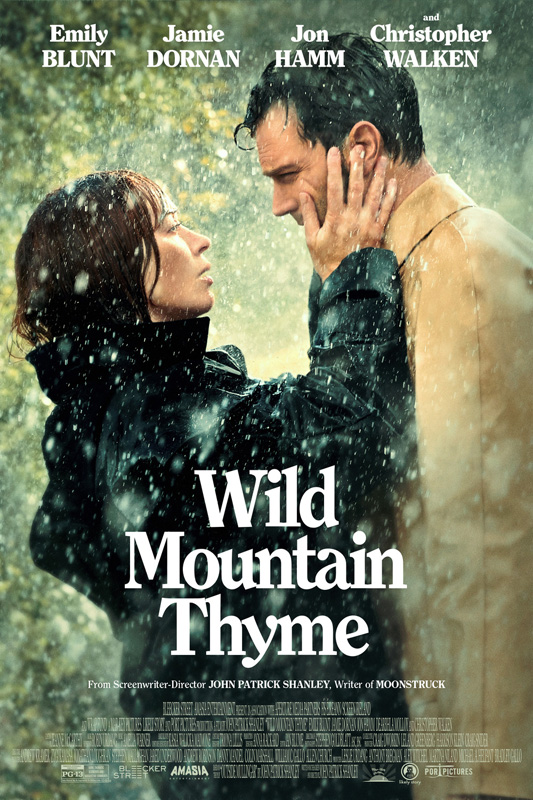 “Wild Mountain Thyme,” a sugary Irish romance, comes to the M.V. Film Center on Thursday, Dec. 24, with the first in-person screening on Saturday, Dec. 26. Directed by John Patrick Shanley of “Moonstruck” fame, it’s a pleasant candy cane for the Christmas season. The movie is based on Shanley’s play “Outside Mullingar.”

After a lovely series of shots of Irish cliffs and surf, “Wild Mountain Thyme” begins with the following introduction: “Welcome to Ireland. My name’s Tony Reilly [Christopher Walken]. I’m dead.” The movie shifts to the Muldoon farm in rural Ireland, when a boy, Anthony Reilly, pushes a girl, Rosemary Muldoon, who happens to be besotted with him (the adult roles are filled by Jamie Dornan and Emily Blunt). We see scenes of Rosemary envisioning herself a white swan, and a ballerina. We see her horse jumping a fence and galloping up a hill, as Rosemary matures and comes to understand herself. Meanwhile, an adult Anthony argues with his father Tony (Walken) about their farm, which is adjacent to the Muldoon farm. Tony insists he will not leave the farm to his son, which leads an angry Anthony to break a window. It turns out that Tony has heard from his nephew Adam (played by John Hamm), Anthony’s cousin in America, who has expressed interest in buying the farm. In a scene that illustrates the film’s sometimes silly brand of humor, Anthony, who is too shy to ask Rosemary to marry him though secretly he loves her, practices proposing to a donkey. Carrying the ring that had belonged to his deceased mother, he drops it. Anthony then gives up hope of ever marrying.

The tension here is that as viewers, we can see clearly that if Anthony (who loves Rosemary) and Rosemary (who loves Anthony) were in fact to marry, the farms could be joined, and ultimately, preserved.

When Adam arrives from New York, he shows up in a rented Rolls-Royce, suggesting his affluence in contrast to the Reillys and Muldoons, along with his tone-deafness about fitting into a community and culture he hopes to adopt as his own. He plans to negotiate purchase of the farm along with the patch of land between the two families that Rosemary owns as a part of her farm — a strip that the Muldoons have used to wield power over the Reillys by erecting two bothersome gates that require the Reillys to get out and open and shut, drive, open and shut, to access their property.

In a turning point scene at a local bar which Anthony has visited with a friend, Fiona (Anna Weekes), Rosemary Muldoon gets up and sings “Wild Mountain Thyme,” a hauntingly beautiful song that Anthony’s late mother used to sing. One obstacle after another prevents Anthony from proposing to a frustrated Rosemary. And that’s when it looks like Rosemary might be interested in Adam: She impulsively flies off to New York to see him and go to the ballet — there’s even a romantic kiss before Rosemary heads home.

Adam returns to Ireland in hopes of landing Rosemary (and the farm), while Anthony searches the fields for his mother’s missing ring. So it goes, until Rosemary works up the courage to confront Anthony. Viewers will not be surprised to guess the swooning result.

If viewers don’t mind the stereotypes, “Wild Mountain Thyme” is a sweet-natured romance that’s a nice present for the holidays.

Information and tickets for “Wild Mountain Thyme” are available at mvfilmsociety.com.