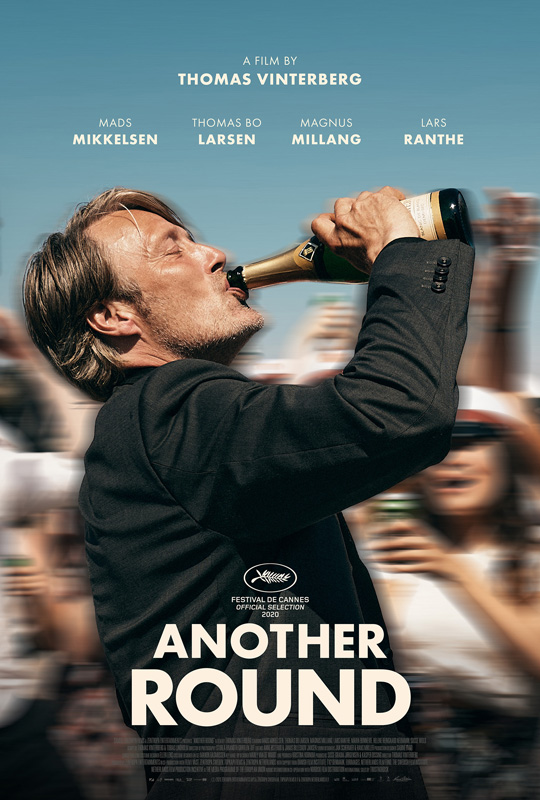 “Another Round,” a comedy on drinking behavior, opens on Friday, Jan. 8, at the M.V. Film Center, and continues online. Considering the distressing state of the world, it’s an entertaining look at how four friends imbibe alcoholic drinks and talk about it.

Mads Mikkelsen, whose career was launched with “Casino Royale” in 2006, and who won 2012 Cannes Best Actor for his role in “The Hunt,” plays the head drinking honcho. Thomas Vinterberg directs the film, which is based on his play, and is the 2021 Danish Best Foreign Film Oscar entry. The director’s daughter Ida, who had encouraged her father to make the film, died tragically in an auto accident as the film was being made.

In a celebration of the Danish drinking culture, “Another Round” begins with a group of students guzzling beer as they race around a lake, occasionally vomiting. The film switches to four friends at a Copenhagen gym in the high school where they work. The four, Martin (Mikkelsen), Tommy (Thomas Bo Larsen), Nikolaj (Magnus Millang), and Peter (Lars Ranthe), celebrate Nikolaj’s 40th birthday at a restaurant. All four seem to be suffering from a midlife malaise; their classes have become boring, the relationships with their wives an issue.

The viewers get their first glimpse at what will become the film’s theme when they begin at the restaurant with champagne, followed by vodka and vintage red wine. The conversation turns to Norwegian psychiatrist Finn Skarderud’s commentary that a blood alcohol level of 0.05 is good for you. Rest assured, however, that felicitous regimen includes no drinking on weekends or after 8 pm. With the film’s focus predominantly on Martin and his drinking, it finds his students responding enthusiastically to his newly inspired teaching. It’s especially the case when he lectures on the drinking habits of such famous people as Ulysses Grant, Ernest Hemingway, and Winston Churchill. As was illustrated in the opening scenes, Danish teenagers are reputed to have the highest drinking rate in the world, and Peter encourages one anxious student to have a drink to relax.

Before long, the four, regularly checking their blood alcohol levels with Breathalyzers, have moved along to binge drinking. A drunken Nikolaj wets his bed while sleeping next to his toddler, and Martin’s son Jonas aids his father when he finds him passed out and bleeding. Tommy, a soccer coach, guzzles on the field from what looks like a water bottle.

A school director further questions the group about rumors of their drinking in class, and booze bottles begin to emerge suspiciously from their hiding places. Martin’s relationship with his wife deteriorates to the point that she leaves him. Nevertheless, the four men decide to raise their drinking to a blood level of 0.10 (a 0.08 level is considered to make one too drunk to drive in the U.S.). Discussions about alcohol continue, as does each of the men’s increasing drunkenness.

Although most of the four men’s alcoholic ventures have a comic bent in the film, it also takes a realistic view of some of the more serious consequences of heavy drinking. The film looks at the toll on Martin’s marriage, and after an alcoholic Tommy loses his job, he disappears in his boat, apparently a suicide.

“Another Round” does conclude on a cheerful note, with dancing, especially by Mads, who has a professional dancing background, and merriment by students and teachers alike. While it may not inspire belly laughs, the film is a cheerful journey through the ups and downs of drinking. Watch for it to win an Oscar.

Information and tickets to “Another Round” are available from mvfilmsociety.com.