In the days after the events at the Capitol on Jan. 6, it seemed a good idea to gather with and listen to what some Islanders were feeling and thinking, so I joined the Unitarian Universalist Church’s online service on Sunday, Jan. 10. As always, they were welcoming and warm with introductions and greetings. I have to say even though we aren’t all gathering in places of worship, it was nice to visit online and to see all those smiling faces.

The guest speaker that Sunday was Dr. David Martin, someone I had heard before and so I knew the discussion would be interesting. Martin was there in 1961 when Unitarians and Universalists voted to merge; he was a seminarian, and guarded the ballot box, Peter Palches explained at the opening of the service.

At the beginning of the service, someone repeated the words of Dr. Martin Luther King Jr.: “Darkness cannot drive out darkness, only light can do that. Hate cannot drive out hate, only love can do that.” I love that quote, and I only wish that when I wake up in the morning I would remember it first thing.

There were readings before the speaker got underway, and one of them talked about “radical empathy,” and putting in the work to educate yourself so that you are able to listen to others with a humble heart. “As Bill Clark [the most recent pastor of the church] would always say, ‘Remember, whatever you’re going through, my friends, you are not going through it alone,’” Peter reminded the congregation before Martin spoke. Wise words.

Martin said, “We are entering a time of hope, but nothing can change without proactive steps.” Then he laid out five activities that could promote empathy.

Revising historical narratives. A good example on the Island would be to study the real story about what happened at Thanksgiving. We have descendants of the Wampanoag tribe who can help us do that.

Adopting opposite viewpoints. Martin explained that a teacher or facilitator selects a particular issue and assigns half of the class or group to adopt that point of view and the other half to adopt the opposing view. They hold a formal debate, and then the next time they gather, the leader switches the assignments. A second debate is held, and then there’s a discussion about what you learned about points of view.

Simulated bias situations. This one can be accomplished in a classroom by having part of the class that identifies as being brown-eyed, separating and sitting on one side of the classroom. The rest of the day the teacher or leader picks on someone from the brown-eyed group for any discussion. They also get to go to lunch and recess earlier. At the end of the day, the teacher asks the classroom about their feelings about the day’s events. Then the next day the teacher switches and they have a discussion eventually about how eye color makes no difference.

M&Ms activity. This works well with younger children. They close their eyes and are fed by a partner blue, green, yellow, red, and brown M&Ms, and in each case they are asked to identify the taste. Of course, the taste is the same and only the surface color is different.

Dilemma situations. In the final offering, observers are asked to define a problem and then think about actions that could lead to possible solutions. There may be different actions that eventually lead to a solution, but which one is actually the best option?

For me, the end of the service was the most informative. That’s when folks chimed in with their thoughts on the current problems our society is facing. I heard what I considered some very good comments, and I want to share some of them here.

One of the first comments really resonated. Why is it that children or adults feel so compelled to not hear the plights of African American or Native Americans? Nobody ever asks them. When we make plans without asking them, it’s oppressive and sets up “us versus them.” The speaker cautioned the group about fixing something for someone when they may not want the help in the way you are offering it. What we are seeing, the speaker said, is the reaction of people who don’t have their basic needs met. There is a horrible housing problem on the Island, she said, and if we don’t address it, we’ll have a disparity. Members of the Wampanoag tribe and other Islanders have migrated off-Island. She suggested that we take a look at basic needs first; when everybody feels like they have a roof over their head and food on their table, then they feel better about helping others. “What I’m seeing is people struggling and forced to leave,” she said. “It’s gentrification. If people felt like their needs were met, you wouldn’t have this reaction.” She pointed out that in Hitler’s time, people were hungry and starving, and he “pointed the finger at the Jews. We need to ask the people who we think we are helping how we can best meet their needs.”

Another member of the congregation said that we talk about truths and the absolute, forgetting that it was once “the truth” that the world was flat. “When we start talking about absolutes without listening about what’s going on, that leads to further divisiveness, and cements the very caste system we say we’re against.” It turns into an “us versus them” scenario. What we need, she said, is time, and careful, deep listening, above all else.

As usual, I left the gathering with the UU congregation feeling like I learned a lot, and that I still have a lot to learn.

Have Faith: Time to try meditation

Have Faith: Hello, my old friend 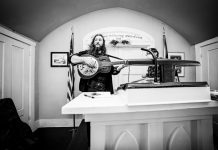 Have Faith: A new shepherd