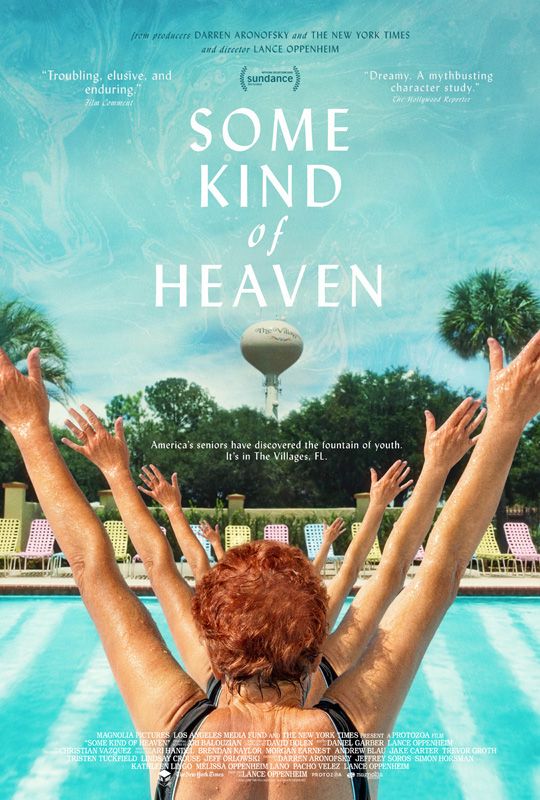 “Some Kind of Heaven” opened at the M.V. Film Center and virtually last week. This upbeat documentary is directed by awardwinning Lance Oppenheim, who grew up near its topic, the Florida retirement community called the Villages, and decided to investigate it cinematically. A suburban utopia in Central Florida for seniors 55 and older, the Villages is the largest such senior citizen colony in the U.S. With the goal of creating a “warm, beautiful, secure, and friendly community,” owner Harold Schwartz founded it in the mid-’80s, and the original 800 residents of the Villages have expanded to 130,000.

After offering an overview of the idyllic life at the Villages, Oppenheim delves into the “fountain of youth” image of the community. He interviews four of the residents, and examines the challenges they face. Anne and Reggie Kincer have been married for 40 years, and are now in counseling. The question is, will they remain in that connubial state? Reggie has been arrested for possession of cocaine, as well as marijuana. Anne observes with concern that Reggie seems to have lost touch with reality. In courtroom proceedings, the judge calls him exceptionally rude, but nevertheless Reggie ends up with four months’ probation with drug and alcohol counseling. “I don’t think he’s going to change,” concludes Anne.

Barbara Lochiatto retired from Boston to the Villages several years ago with her husband, who subsequently died. The viewer sees this lonely widow trying out a new golf cart, getting her hair washed, and eventually meeting Lynn, the margarita man. One striking image shows her alone on the dance floor, surrounded by couples. It provides a strong contrast to the community’s Disneyland-like bubble. Dennis Dean, an 81-year-old roué, lives illegally in his van on the property, and looks for an affluent woman to move in with to support him. He finds one, but he has also evaded an arrest warrant in California.

What isn’t mentioned is how much this fantasyland costs its residents, as well as what their shared political beliefs or intellectual pursuits are. Plenty of film shots illustrate the perfectly manicured golf links and homes, but the illness and physical decline that the Villages residents must inevitably face that lie beneath this idealized surface are at most hinted at. By the way, the film does include mention of discounted funeral packages.

Information and tickets for “Some Kind of Heaven” are available at mvfilmsociety.com.