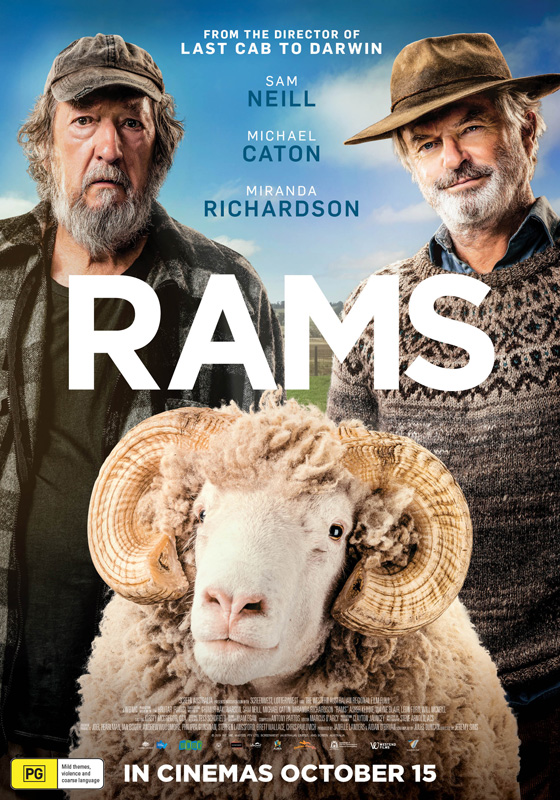 The Australian comedy drama “Rams” presents two warring brothers and their sheep, ongoing at the M.V. Film Center and virtually. Adapted from the prizewinning Icelandic film of the same name, it stars Sam Neill as Colin, Michael Caton as Les, and Miranda Richardson as veterinarian Kat. Jeremy Sims directs.

For reasons “Rams” doesn’t disclose, the two brothers have not spoken to each other in some 40 years. The feud is the film’s subject, even though these two aging, grungy brothers live on adjoining farms in rural Western Australia. Finalists at a ram contest, the two cranky curmudgeons ignore each other, but only one of them can win. Much to Colin’s annoyance, it’s Les who takes the honors. Colin heads back home in a huff with his handsome ram, angry once again at his brother.

The film illustrates with warmth and humor life on the farm, without turning syrupy. Colin transports his ram in a cage on the back of a pickup; he calls members of his herd “beautiful”; he washes his ram in the bathtub; and there are scenes of Colin’s dog Kip herding the sheep. An excessive drinker, Les lies comatose in a field. Colin looks at him and moves on. Meanwhile, Les takes a rifle and shoots at his brother, missing but illustrating the reality of their hostilities. Colin later takes out a gun for protection.

Then a crisis occurs. Les’s prizewinning Merino ram is diagnosed with a severe and life-threatening disease, and health officials, including Kat, require all herds to be extinguished. The more ornery of the two, Les, growls, “They’re not taking my sheep.” Nevertheless, the film shows his entire breeding stock dead and piled into a pit for burning. As if that is not enough, health officials require the porous wood in the sheep shed to be removed. Les refuses again, and the health officials ask Colin to contact Les about decontaminating his barn.

Colin hides his ram and several ewes in his house, feeding them green grass he has grown. To show the kind of low-key humor this interior scene has, the ewes drink from a bathtub full of water. When health officials arrive, Colin races around spraying air freshener and turns up the radio to hide the sound of his hidden sheep.

When a friend arrives with meat as a Christmas present of sorts, he smells a curious sheep odor. Later Kip alerts Colin that Les is comatose outside. Colin drags his brother into his house and bathtub and covers him with a blanket. In another scene of Les comatose, Colin shoves him into a tractor scoop, drives him to the local hospital and dumps him there. While Les remains in the hospital recovering from alcohol withdrawal, Colin looks at photos of the two as boys in Les’s house. The scene isn’t sentimental, but suggests memories of an earlier time when the two were close.

With a fire raging in the nearby bush, both Colin and Les are called into action, but Colin suffers from smoke inhalation. Suspecting the sheep his brother has hidden inside, Les grumbles, “I know what you’ve got in your house.”

A bit of romance runs through the film as Kat comes by several times to check on Colin and ends up, in his surly confrontation with her, affirming the strictly male world of the film. More dilemmas bring warm-hearted “Rams” to resolution in an ending suitable for its message: Don’t mess with these scruffy men who have their own cantankerous way of wending through life.

Information and tickets for “Rams,” either online are at the Film Center, are available at mvfilmsociety.com.