Anytime I can take a drive up-Island to Aquinnah I do it. Usually it’s when we have visitors and they want to see the sights, but it’s even better when I head up that way just for myself or with my family in tow. Last Sunday, my husband and I made the trip up for the 10 am service at the Community Baptist Church of Gay Head in Aquinnah. Musician Sean McMahon began serving as associate pastor at the church in September and is licensed and on his way to ordination in the American Baptist Church.

Now, many of you know Sean from the Ritz, where he performs a lot with his brother Griffin in the McMahon Bros. He also led the Holy Rock ‘n Roll Revival there on Sunday nights, playing and singing music inspired by his faith. I’ve seen him play along with lots of Island musicians, including his wife Katie Mayhew-McMahon. I love their music, separately and together, and I was very interested in finding out how Sean is mixing music and faith these days.

The first thing that struck me once I settled in a pew was the quintessential charm of the little white church, still sporting some holiday greenery before the service. Greetings were warm and even though there were only around a dozen folks there due to the COVID reality, this small gathering of believers felt like the perfect size. (There were also a few members following along on Zoom.)

I’m one of those people who truly loves visiting unfamiliar churches. I want to look at the books on the back of the pews, see what type of music we’ll sing, read some of the prayers ahead of time. Maybe that’s called a church geek. Anyway, I was already happy at the prospect of possibly singing church hymns along with professional musicians — I apologize here and now if I sang too loud in my excitement.

Church clerk Mike Gilman distributed a packet that explained the order of the service and contained the prayers and songs we’d be singing. It also included the title of Sean’s sermon — “Church Growth and Beer.” If my interest wasn’t piqued before, it sure was after I read that. How would he explain the connection between the two?

At the beginning of the sermon he said something that was a little shocking but had nothing to do with beer: “I have to confess,” he told us, “I cannot grow this church, and if I try, I will fail.” At first I thought maybe he’d better not get too comfortable up there in Aquinnah, and then he explained his point.

He quoted St. Paul in the sermon too, reminding everyone that God is the one who makes a church grow. “When Paul talks about the growth of the church, he describes it in terms of gardening,” Sean explained. “’I planted the seed and Apollos watered it, but God made it grow. So neither he who plants nor he who waters is anything [or anyone} special … we are God’s fellow workers; you are God’s field, God’s building.’”

The new pastor then went on to explain more about this idea of growing the little church in Aquinnah. He mentioned televangelist Joel Osteen, who packs arenas with millions of people hearing his message and buying his books.

“Not to knock Mr. Osteen — but is that church growth? Or is that business growth?” Sean asked. “Is that audience growth? He’s got serious numbers. But are numbers how we measure church growth? The church is a body comprised of individual members, just as any organism is a body made of cells. Now, if such an organism enjoys unmitigated cellular growth, in the same way that a church can enjoy unmitigated membership growth, is that growth to be celebrated? No. That’s cancer.”

He suggested that church members shouldn’t think of growth only by the number of members but by the spiritual health of those who come to worship. “We shouldn’t think of growth as merely getting bigger, but as spiritual health. We should think of growth less in terms of church membership and more in terms of the spiritual maturity of our members.” And besides, the town has around 350 residents and is the least populated town on the Island. How much is the church’s membership realistically going to grow? I digress, and I really want to get to the part about beer.

Sean began the beer portion of his sermon by calling out beer brewed by monks: Chimay, Rochefort, and Spencer to be exact. All brewed by monks who live a life so ascetic that they barely eat. Where do they get some of their nutrition? Beer, of course, heavy Belgian beer. “For these monks,” he said, “drinking beer wasn’t about going out for a wild night at the Ritz. It was part of their religious life and part of maintaining their health. They drank beer the way yoga moms drink kombucha, kefir, or beet kvass. Fermented and nutritious, cleansing to the body and soul.”

Finally, he connected the growth of the church with this notion of beer. He wants the members to cultivate (or brew) their spiritual life, focus on their spiritual journey and then share it with the world, like the monks share their beer.

“Like beer, it won’t be for everyone. It might be controversial. It is often the things within us that have brought us the most pain that will save us,” he said.

“Our old church is like a tree with really deep and strong roots. But perhaps the branches have been overpruned; as you can see — there aren’t a great many branches at the moment. So maybe it’s time to let the branches go unpruned a bit and run wild and see what fruit they bear.”

In other words, he asked everyone to brew their own beer in a sense, to ask God into their lives and to ask Him to bear fruit in their lives. And let it ferment and pour out that offering to the world. Wow.

We stayed after the service ended so that I could talk a bit with Sean about the whole picture. I wanted to know how music and faith connect for him, or do they still?

I also wanted to know where he finds his own inspiration, and right now much of that comes from his interior life as we’re all in this sort of holding pattern and spending a lot of time at home.

“I guess I don’t separate my internal life from this communal life. Inspiration comes from my interior life, which unfolds from our communal life.” And when he’s developing those messages for Sunday worship, he said he’s thinking about what he needs to hear, what others need to hear, and what the church needs to hear.

“The world needs a lot of love right now, and I want to speak not to just people who are initiated but people who have not heard it before. Or people who are sick of hearing it and they need to hear it a different way so that they know love is what it’s all about.”

Even though this new pastor may not be in the business of counting heads, there are some plans underway for the church. The church hasn’t had its own pastor in a hundred years, and the parsonage could use some work. (The Rev. Dr. Leo Christian, pastor of the Vineyard Haven First Baptist Church, has been a mentor to Sean and previously served both churches.) Mike Gilman spoke a bit about what the church body is considering these days.

“We see the restoration of the parsonage as it’s integral to the development of our congregation,” Mike said. “One of our challenges is that we have had a pastor who has had to divide time between here and Vineyard Haven, and what that has not enabled us to do is to have a pastor deeply rooted in the community as a neighbor. We hope and pray that if we’re successful, that Sean can reach out and develop roots and relationships that can enhance the church and get people back to worship.”

Another endeavor in the works is a documentary about the history of the Aquinnah church and about the way it is now. Sean has been working on this grant project as part of his work with the Foundations of Christian Leadership out of Duke University. He said he hopes it’s completed over the next several months, hopefully in time for summer.

There’s definitely something happening in the little white church, and you might just want to take a drive up there yourself. If you don’t like that idea (and everyone understands that these days), you can catch the service on Zoom by visiting cbcghaq.wordpress.com. 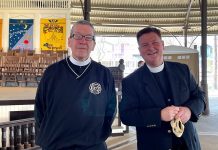 Have Faith: Easter at the Tabernacle

Have Faith: Easter and Passover

Have Faith: Time to try meditation