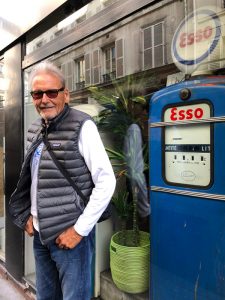 Born on Oct. 13, 1946, Dennis grew up in Abington, where he played varsity football and graduated from Abington High School in 1964. After high school, Dennis moved to Martha’s Vineyard, and soon became a legendary Island presence with his larger-than-life character and ebullient spirit. He started his tree-removal business, Tabor Tree, which he named after his beloved yellow Lab, Tabor. It was work that he loved, and he, in turn, was loved for always giving his workers a chance to be their best.

A self-described dog whisperer, Dennis was known for having dog biscuits in his truck for all the dogs on Martha’s Vineyard, who knew the sound of his diesel engine. Upon entering a room, Dennis had a talent for putting everyone at ease, and making even the newest acquaintances feel like old friends. Those were lucky enough to know Dennis remember with fondness his many sayings, such as “Who loves you?” and “Do you miss me?”

Although he often said that he took the first half of his life off, he certainly made up for lost time in recent years. Over the past decade, Dennis embraced life in sobriety with the same gusto that he approached every adventure and misadventure in his life. His willingness to help newcomers was boundless, and his generosity was unparalleled. He never gave up on anyone. He thoroughly enjoyed his life, his work, and his unofficial title as mMayor of Oak Bluffs. His kindness, patience, humor, love, and acceptance had no boundaries for people, or animals. He leaves a massive void in the recovery communities of Martha’s Vineyard and Key West, particularly the Early Bird and Anchors Away meetings, which he loved so much.

Dennis was predeceased by his beloved mother and father, Dorothy R. Redican (“Dotty,” née Harris) and Joseph J. Redican; and his brother, Joseph F. Redican. Dennis is survived by his niece, Michelle M. Redican; his nephews, Patrick J. Redican and Ryan T. Redican; his grand-niece and grand-nephew, Kayla Redican and Patrick J. Redican Jr.; his dearest friend, Danièle Albert, his Tabor workers both past and present, his beloved AA community, and innumerable friends from near and far.