This past summer, many Martha’s Vineyard Regional High School (MVRHS) students took part in the nationwide movements for racial equality sparked by the deaths of George Floyd, Breonna Taylor, and other Black victims of police brutality. February is Black History Month, and MVRHS is celebrating by sharing writing by Black authors and poets, screening the documentary “13th,” and pursuing curriculumbased changes to ensure that Black history is recognized year-round.

Director of student affairs Dhakir Warren feels that celebrating certain cultures shouldn’t be contained to one month out of the year, but instead integrated into everyday life.

“Now we have this month, and it’s kind of become this idea that, ‘Oh yeah, we don’t really have to think about the importance of Black history until February,” said Mr. Warren. “But we are not doing all this stuff that’s happening just because it’s Black History Month. It isn’t just about African American history, it’s the history of all people of color, people that have been marginalized, and people that have had to engage in social movements and mobilize in pursuit of social change.”

Junior Emmett Favreau, who serves as co-president of MVRHS’ Black Student Alliance (BSA), feels that the high school has done a better job this year than in the past with recognizing Black History Month. “I noticed the poems, a lot more stuff has gone up, there’s been more awareness toward [Black History Month],” he said, explaining that he only saw a small poster display by the cafeteria last year.

English teacher Christine Ferrone organized student readings of poems by Black authors over the loudspeaker every morning. She and her students chose poems that they felt illuminated the experiences of people of color in the U.S.

“Words are powerful, and the poetry over the loudspeaker is one way to at least get the words of important African American artists out there,” she said. “It was both a celebration of the rich culture and background that these African American authors have put into words through their poetry, and also the poems themselves reflect their conflicts.”

Ms. Ferrone also made a point to emphasize that while it is especially important to celebrate Black history right now, it shouldn’t be something done only during the month of February. She feels that incorporating diversity and recognition of all people into the curriculum is most important. “It is a way to honor the depth and breadth of voices we have in our culture,” she said.

The MVRHS Black Student Alliance encouraged people to participate in an online program called “A Long Talk,” which regularly holds conversations about racial bias in America and how to be antiracist.

“Over the three days we talked with people of all ages about different issues and how to combat them, we practiced scenarios and what to say,” Emmett said. There was such a large contingent of MVRHS BSA members participating that their group received a shoutout on the last day for their involvement in the program.

History teacher Leigh Fairchild-Coppoletti is part of a group of faculty called the Racial Equity Group (REG) that was founded at the start of the 2020–21 school year, and is working to diversify curricula, among other endeavors. “We have gotten some terrific training about current racial injustice issues, and have done a lot of our own posttraining discussions about what we can do in the school to make it more appreciative of diversity,” she said.

The REG is working on a variety of long-term projects, including a “document that’s accessible to teachers in every department to give ideas for how to make their curriculum more broad and inclusive,” said Ms. Fairchild-Coppoletti.

Other projects currently being developed by the REG include a Black History Retrospective, a mixed-media art project, and the organization of a schoolwide Diversity Day.

School adjustment counselor Amy Lilavois, who is also part of the REG, spoke to increasing cultural awareness and inclusivity at the high school. “We are starting out with the smaller stuff that is less time-consuming to put forth, leading up to much bigger projects that will not even take place until next year. It’s an ongoing process,” she said. “This is an  opportunity for us to do things for the community, and now it’s not going to stop.”

Mr. Warren said that teachers reassessing the diversity of their curriculum will have the biggest impact on cultural proficiency at MVRHS. “It starts with an education. We need to educate teachers especially so we all have a shared understanding of what the work we need to do is: what systemic racism is and how it is manifested specifically in this environment [at MVRHS],” he said.

MVRHS is also working on educating students about these issues. Friday, Feb. 12, was an asynchronous day devoted to viewing the documentary “13th,” which explores how systemic racism has persisted throughout American history and shaped the prison system we have today. There was also a mentor meeting, where students discussed the film after the screening.

Emmett was happy with how the day was structured, and felt it sparked conversations that might not have taken place otherwise.

“I want to believe that everybody is willing to fight for awareness and change, but I feel that a lot of people can’t do it without that push. That push was the constant reminder that the reason we were taking that day off was to watch [“13th”], and that you had to attend that mentor meeting,” he said. “It encouraged a lot of people to go out of their comfort zone and watch the movie to learn things that they might not have.”

While MVRHS is focusing on Black history and racial injustice this month, the MVRHS Women of Color Support Group has been meeting weekly since November to discuss the
intersectionality of their experiences.

Danielle Hopkins, a MVRHS class of 2017 alumna and founding member of the group, said,
“The goal of the group is to provide a space for women or nonbinary people of color at MVRHS, Falmouth Academy, or other Island high schools to talk about experiences they have had, whether it’s related to race or their experiences in general growing up.” The group has discussed topics such as body positivity, colorism, health disparities between racial groups, stereotypes, and self-care.

“I don’t think when I was in high school there were any explicit spaces for students of color,” said Danielle. “I hope that there are more spaces created and effort to be aware and inclusive. It’s hard, because part of it is that it’s a predominantly white school and Island, so it makes sense that there’s not a ton of spaces for people of color.” Mr. Warren feels that this year’s Black History Month has set the foundation for progress. 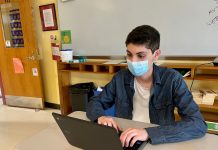 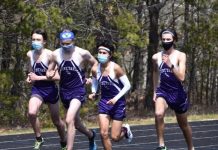