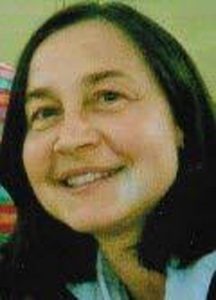 Robin Schoener, 67, of Oak Bluffs, died on Feb. 3, 2021, after a long and valiant fight with cancer. Robin grew up in Western New York, and after living in several other countries including Egypt, Belgium, and Brazil, settled in Boston.

Robin came to Martha’s Vineyard in 2016 to take care of her friend Bob Jacobs in his last days. After his death, she decided to retire to Martha’s Vineyard permanently because of the loving friends and community that she took comfort in. She joined the Community Choir and the Island Grown Gleaning Initiative.

She also enjoyed being a member of the Bend in the Road Book Club. Robin loved getting to know the Island, and with her close group of friends she enjoyed many outings to all the Island events before she became ill. She was talented on many levels, including weaving, needle point and singing.

Robin also loved connecting with people of all ages. Making new friends while shopping at the grocery store or taking a walk on her block was as important as the errand itself. She had a quick and easy humor that kept her and those around her laughing, even when her health was clearly on the decline.

Robin was a lifelong student of languages, and spoke five languages fluently. She held a B.A. in education from Fredonia State University, an M.B.A. from Simmons School of Management, and in 2016 she earned a B.A. in linguistics from Harvard University Extension School.

In her last days she was lovingly cared for by Susan Nugent of Hospice, and by her caretaker, Lilly Easter.

Robin was the daughter of Fred and Jean Schoener. In addition to her brother Rick Schoener, sister Melissa Mitchell, and cousin Wendy Schoener, she is survived by her close group of friends, Jan Campbell, Margaret Curtain, Maryann Heller, Fran Newton, Hilda Spann, and Kathi Pogoda, and her honorary granddaughter, Hunter Creanga, daughter of Adriana Ghidu and Cosmo Creanga.

Robin was laid to rest in the Oak Bluffs cemetery. To make a tribute by way of donation to VNA Hospice, please go to vnacarenetwork.ejoinme.org/vnacare.