Glenn Hearn died peacefully at home in West Tisbury on March 2, 2021, of complications from Parkinson’s and heart disease. 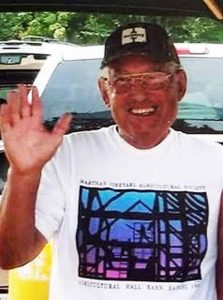 Glenn’s family moved to Vineyard Haven from Hyannis when Glenn was 3 years old. His wife of 60 years, Linda (Magnuson) Hearn, teased him that even though his roots on the Vineyard were very deep, he would never be a native like she was.

Glenn attended and graduated from Tisbury School in 1955. The Vineyard’s first football team was started in 1953. This was the first Vineyard sport to involve all three high schools. Glenn was quarterback of that team for his junior and senior years.

Glenn graduated from UMassAmherst in 1959 with a B.S. in electrical engineering. Glenn and Linda were married in November 1960, and celebrated their 60th anniversary last November. He received an M.S. in electrical engineering from Northeastern University in 1963, and a M.S. in education from Lowell University in 1974. During his engineering career, he worked at several firms in and around Boston. He also taught engineering to graduate students at Northeastern U. For the five years before he and Linda moved back to the Island, he taught computer science there.

They moved back to the Island in 1993, where he started building the house they lived in for more than 25 years. Very soon after he started living here, he became involved with the Agricultural Society building project, and went to New Hampshire as one of the Barn Busters, to take apart and bring back the barn that now houses the Agricultural Society, later becoming clerk of the works on the project as they rebuilt the barn and built outbuildings.

Glenn then taught in the math lab at the regional high school, and developed the hydroponics greenhouse and classes there.

Glenn served two terms as West Tisbury selectman. He was a longtime trustee of the Ag Society, the Land Bank representative from West Tisbury for 15 years, and was one of the original founders of the FARM Institute.

Glenn enjoyed fishing and hunting with his brothers in his younger years, winning many prizes in the Bass Derby, but never the big one, and he always came to the Vineyard to hunt during deer week. Glenn and his wife had a stand at the West Tisbury Farmers Market for more than 25 years, where his children and grandchildren enjoyed helping when they were here on vacation in the summer. His hobbies included gardening and woodworking, and making furniture. Glenn entered his vegetables and woodworking projects in the fair, and over the past 15 years, he enjoyed carving birds. He and his wife did some traveling in retirement, but he definitely preferred spending his time here in West Tisbury. He enjoyed spending time with his children and grandchildren, and was proud of their achievements and successes.

Glenn was predeceased by his parents, Kenneth and Eunice (Rogers) Hearn, and his brothers Kenneth and Kevin. He is survived by his wife, his son Mark and wife Renee, his daughter Susan and husband Timothy Collins, and his daughter Laura Hearn; and by six grandchildren, Emily, Jessica, Devon, Blake, Shaun, and Morgan. He also had many nieces and nephews.

Burial at the West Tisbury cemetery is private, with a Celebration of Life planned for a later date.
Donations in his name can be made to the M.V. Agricultural Society, P.O. Box 73, West Tisbury, MA 02575, toward a scholarship in his name for a graduating senior of the regional high school or the Charter School, for a student planning to study in the field of agriculture, or to the Parkinson’s Foundation.