If you haven’t purchased “The Blue Zones Kitchen: 100 Recipes to Live to 100” by Dan Buettner by now, I’ll wait while you pick up a copy.

What a great read, and the recipes aren’t bad either. They come from people who live around the world — places where the lifespan exceeds most of our expectations. The author visited kitchens from Ikaria to Okinawa, and documents the recipes and traditions he learned from the people he talked to along the way. Since I truly would prefer if I could live forever, I’ve begun using some of the recipes, and I’m trying to abide by at least one habit I read about. My interpretation is that it’s better if you don’t eat a heavy meal past 2:30 pm. Every once in a while I actually pull this one off.

I’ve scoured every recipe in the book, and I have a few go-tos, including the one for Winter Potato Salad I’ll share here. When I was growing up, potato salad was strictly a summer dish, enjoyed at around the same time we’d eat big, juicy tomato slices with salt and pepper on them. This potato salad is different, though, because you can make it anytime, and it’s not floating in mayonnaise.

There aren’t many recipes that I follow to the letter, and I did make a few adjustments to this one. I didn’t have fresh spinach and I didn’t have lettuce, so instead I threw two cups of fresh green beans in with the potatoes for the last five minutes they were cooking. It came out just fine, and in fact, everyone in our house loves green beans, so it was a good substitute. I also used three pounds of potatoes because we like leftovers. Try this. I think you’ll like it.

From “The Blue Zones Kitchen.” (Note: I mixed all the ingredients together while the potatoes were still warm, and it was delicious.)

Bring 8 cups of water in saucepan to boil.

Add potatoes and cook uncovered until tender, about 12 minutes. Test by piercing potatoes with a fork — if they pierce easily, they are ready. Drain potatoes and let cool.
In a small bowl, combine dill, olive oil, and vinegar; season with salt and pepper to taste. Whisk until well combined. In a large serving bowl, combine potatoes with dressing and toss well.
Just before serving, add remaining ingredients through lettuce, and toss to combine. Garnish with radish, if using. 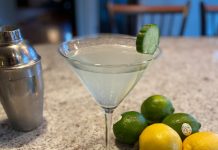 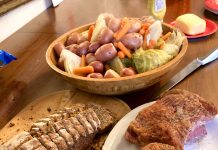