Frank Ferro, born at home on August 13, 1930, to Jennie (Magliato) and Louis Ferro, died from heart failure on Feb. 24, 2021. He was surrounded by the love of his family, and transitioned peacefully. 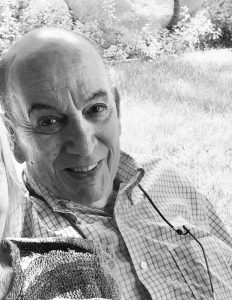 The youngest of seven much older siblings, Frank was born and raised in the Bronx by illiterate parents, and attended DeWitt Clinton High School. As a child, he played stickball in the streets, and saved his money to independently attend home games at Yankee Stadium, where he sat in the bleachers with a scorecard. As a young teen, he developed a lifelong affection for jazz, and used his savings to buy 78s and to travel on his own to Manhattan (a world away) to see many of the jazz greats on 52nd St.

Frank attended Goddard College, and following graduation in 1952, allowed himself to be drafted into the Army during the Korean War. He served stateside as a combat cameraman, and although he was stationed in Queens at the Sony soundstage, he spent his years in the Army traveling the country, including the documentation of atom bomb testing at Fort Desert Rock in Nevada. Following his discharge in 1954, Frank worked as a camera operator, proudly earning his union card in Local One. He received his master’s degree from the New York School of Social Work (now the Columbia University School of Social Work) in 1958, and embarked on a long career serving the well-being of others, especially youth.

Frank’s first job was working with street gangs in New York City, and he rose to become a supervisor. During this period, he consulted on shooting locations for the film “West Side Story” with director Robert Wise, and won a Fulbright Award to study gang work in London and other parts of Europe. He later worked for the Office of Economic Opportunity in New York, and then for many decades as the associate director of the Children’s Bureau at Health, Education and Welfare (now HHS), where he developed legislation and programming for foster care, adoption, Head Start, and other federally administered child welfare programs. A colleague shared that “his achievements included Section 473 of the Social Security Act, which to this day helps adoptive parents of special needs children. Also, the development of the National Center on Child Abuse and Neglect, and the passage of the Adoption and Child Welfare Reform Act of 1980, enabling foster children to be adopted in a permanent home. I mention these legislative milestones to illustrate that 50 years later, hundreds of thousands of children and families have benefited from Frank’s vision and diligence. Franks leaves a beautiful legacy.”

At a New Year’s Eve party as 1958 turned to 1959, Frank met the great love of his life, 19-year-old Ursula Marti. Ursula was raised on a farm in southern Ohio, and was working in NYC as an au pair. Within five and a half months, they were married — June 12, 1959 — and were inseparable from that time on. Frank always said that Ursula made him who he was and gave him all he had, including two daughters, Tova and Marta.

Frank and Ursula lived in the West Village, with a year’s sojourn in London, and raised their family first in New York City and then in Chevy Chase, Md., on the outskirts of Washington, D.C., where they moved for Frank’s job at HEW.

Frank and Ursula first came to Martha’s Vineyard for their honeymoon, in June 1959, when Ursula’s au pair family lent them their new home at the top of Christiantown Road (the only one on the road at that time). They bought their house nearby, on five acres in North Tisbury, in 1971, and over the ensuing years, created a beautiful family home to which they retired in 1995. In the late ’90s, they began to spend several months of the winter in warmer climes, first on Vieques, Puerto Rico, and then for almost 20 years in Santa Barbara, Calif. Wherever they were, Frank and Ursula forged deep and abiding friendships, and continued their lifelong love affair.

Frank was a generous, sometimes boisterous, fun man who often hosted dinner parties, replete with curated jazz and animated discussion. He loved sharing a good meal accompanied by wine, reading (including the New York Times from cover to cover, every day without fail), theater, art, and rugs. He was independent until the end of his life, including driving and mowing his own five-acre lawn until 89 years of age. His life revolved around his family; he loved us unconditionally, and was a present and supportive presence in all of our lives.

Frank’s ashes will be interred privately at the West Tisbury Cemetery, with a celebration of his life to be held at a later date when we can gather together. If you wish, you can honor Frank by savoring time, even virtually, with those you love.