I have a 15-week-old mini aussiedoodle whom I adopted at 13 weeks. The first two weeks were going fairly smoothly until the last few nights when he developed what seems like a sudden fear of his crate. He won’t go in voluntarily, and at bedtime now he cries, barks, and screams like it’s the end of the world (he has a soft bed, puppy chew toys, a snuggle puppy in the crate, and I’ve added a T-shirt with my scent, tried covering the crate with a blanket, and tried played soothing music). Nothing seems to help his anxiety even though his crate is right next to my bed.

Any suggestions on how to help him get over his fear of what should be one of the happiest places on earth?

You’re absolutely right about his crate being — should be — one of the “happiest places on earth!” The crate should represent a “den” to accommodate a dog’s den instinct. It will be the first place for him to develop “holding” power to avoid soiling his den. The expression “dirty dog” comes from a dog that will soil his den and lie in it and not care. Dogs can be “made dirty” by careless owners, but few dogs are that on their own.

It’s not worth the effort to try to figure out what turned his 15-week-old mind off to the crate as it’s already a done deal, so the thing to do now is change his attitude. If he’s still being fed three times a day, please give him two of his meals in the crate, initially with the crate door open and the bowl right at the entrance to the crate. The next meal is fed with the bowl just inside the crate with Pharaoh still standing outside but leaning in to eat. With success building on success, you’re moving the bowl further into the crate until he’s all the way in, enjoying his meal in his den. The crate door stays open while eating, unless he’s OK with it closed at this point.

If the only time on planet earth he gets pieces of chicken or steak is when little pieces are thrown into the crate, it’s likely to give him a much more positive attitude toward being within those four walls. If possible, make the crate floor the plushiest, most comfortable spot in the room for him to hang out. The doodle in him will appreciate it!

The moment you see him go in there on his own, I suggest you exclaim how overwhelmed you are with gratitude and love by giving him some of those “special” treats (in the crate of course). Give him vocabulary by saying, “Incarcerate yourself” or “Go to your house” or whatever. Then toss some of those special treats in and watch him charge in for the tiny meat pieces. Whenever you close the door to confine him, the moment after the door closes a special treat gets tossed into each of the four sides of the crate and then walk away. The toy ball that dispenses treats (not meat) as it gets knocked around is ideal for confinement times, plus a good chew toy. Socializing him to the real world will vastly increase his confidence with everything, and this crate fear blip should become just that, a past blip.

Good luck, and please keep me abreast of your progress. 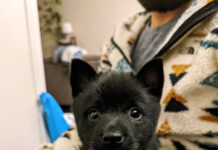 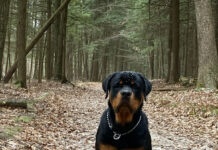 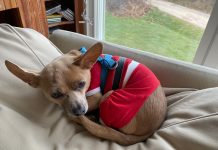