Almost, but not quite.

Sandwich won the season opener 14-0 in a grinder at their house two weeks ago. With Saturday’s verdict, Sandwich remains undefeated (3-0) as the Vineyarders slipped to 1-2 on the six-game season.

“Well, I thought we played good enough physically to win. But we had a couple breakdowns on their scores. Offensively, though, we’re not executing properly. We lost points, particularly at the end of the first half and at the end of the game, because of mental mistakes,” Coach Don Herman said in the game postmortem.

Wins are the most important stat, particularly in football, where contestants have half the games available in other sports. But for observers, it is exciting to watch the development of players and team ethic in the urgency of a short season.

The Purple have a lot of that going on. Consider Hiaggo Goncalves, senior soccer goalie turned football player. Against Sandwich this week, Goncalves had four tackles, an assist, a sack, and a fumble recovery, as well as kicking duties that included a made extra point.

Or sophomore T.J. Lett, who’s emerged as a prime defender in the early going, with six tackles against the Blue Knights. And it’s good to see Ty Mathew getting his chance after a couple of years fighting for carries in a crowded backfield. This week Mathew ran for 87 yards on the ground, including a 65-yard burst for a game-tying TD in the second quarter.

Team defense has been a plus, it says here. Fourteen players made the stat sheet this week, after 15 made it last week. Hunter Meader led with eight stops, followed by Owen Metell and Lett with six. Alec Calverly, Braden Sayles, and Oscar Shepherd had five tackles each. The Blue Knight quarterback had success scrambling outside against the right-side Vineyarder line.

“We have a really good turnover ratio. We have six against our one turnover. Unfortunately that one [fumble] happened on their four-yard line, near the end of the game,” Herman said.

“He’s good, no question, and we had him in long-yardage-needed situations pretty much, but he got away enough to set up the game-winning score,” Herman said.

Offensively, the Purple can run the ball, amassing 119 yards on the ground and another 30 through the air, with Zach Smith completing five of eight attempts to five different receivers.

And COVID, the gift that keeps on giving, is still at work. The Vineyarders will not play Pope John Paul II this week, as the virus has rendered PJP II hors de combat. “I must have called 10 schools to replace the game, with no luck,” Herman said. “Look, it’s day-to-day right now, and can change any day. We’re diligent with masks, testing, and equipment, but COVID doesn’t care about diligence.”
On the bright side, the Vineyarders have some R and R time before Senior Day, April 10, against Monomoy. The extra time will provide a recovery period for senior safety Braden Sayles, who sprained an ankle after stepping in a pothole Saturday. 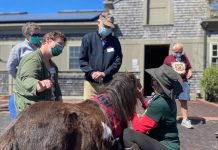 The mane event at Misty Meadows