Home Business & Shopping Made on MVY Little glass jars: I know you’re good for me, but what are...
Facebook
Twitter
Pinterest
WhatsApp
Linkedin
Email
Print
1 of 11

There’s something inviting about those little glass jars with homemade labels topped with a cute rubber dropper. Whenever I find myself meandering through the West Tisbury Farmers Market or poking around Island shops, I’m drawn to these apothecarist displays.

We all care about our health — at the end of the day, it’s all we have. Maybe we’re more aware of that in the COVID era. Maybe we make more time for it.

So what’s inside the bottle? For the purpose of this piece, we’re sticking with tinctures and infused oils, and we’ll also take a look at salves, as well as some of the native plants you can use to make your own.

Clinical herbalist Susie Nedley of Bee Well MV is a go-to source for topics like this one. You’ve probably seen her at the Farmers Market, or blading around the Island most Sundays. Nedley makes it all — tinctures, oils, salves, serums, teas — you name it.

Tinctures, she told me, are concentrated herbal extracts made by soaking the bark, berries, leaves, or roots from one or more plants with a “menstruum” (a solvent) of choice such as alcohol, vinegar, or glycerin. The menstruum pulls out the active ingredients in the plant part, eventually concentrating them as liquid. The extraction process takes a few weeks, but the liquid is the final product — the tincture.

So why use a tincture? You can use one for any kind of health condition, and someone like Nedley can tell you which one is best for which ailment. A tincture infused with chamomile, for example, can be effective for treating anxiety or reducing inflammation. One with ginger can reduce nausea or offset motion sickness. St. John’s Wort tinctures are said to help ease the symptoms of depression.

Tinctures are generally meant to be taken by mouth by placing drops on the tongue, the number of which varies depending on the tincture’s concentration as well as body size and age. Nedley said tinctures hit the bloodstream within seconds, so they’re especially effective if you have an acute condition like a broken bone or a cold.

I was curious what kind of tincture to take if a person didn’t have a specific ailment, but just wanted to stay nourished. An “immunomodulator,” Nedley called it, and it’s a question she gets a lot.

“Right now, especially given the current climate, I’m recommending medicinal mushroom tinctures,” she said. “It gets your immune system ready in case any pathogens come its way.”

Infused oils, which can appear and be packaged similarly to tinctures, serve a slightly different purpose. They’re prepared by taking a carrier oil such as olive, sunflower, or jojoba, and combining it with fresh or dried plant material and letting it steep for a few hours. Infused oils can be used topically or internally, often topically in baths, as a moisturizer, or in salves, and internally for culinary purposes like making salad oils or dressings. Infused oils are a general relaxer and “get the blood moving,” Nedley said. She uses St. John’s Wort for one of her popular massage oils. When combined with essential oils (which are a more complex oil blend), infused oils can serve as aromatherapy as well.

I spoke with another expert, Dr. Angela Knapp, a naturopathic physician at Integrated Health Care in Vineyard Haven. She said infused oils are a faster way to reap the benefits of these plant parts, because they only take a few hours to make as opposed to several weeks. But the result will be less potent in comparison to tinctures or salves, she said. Dr. Knapp also gave me a list of wild plants you can find here on the Island to make your own healing products. We’ll get to that soon.

On to salves. Both tinctures and infused oils can be key ingredients in a salve. A salve is a medical ointment, cream, or balm used to soothe the surface of the body. They are made out of waxes and oils to make a material that is semi-solid. Salves stay thick and stable because they don’t usually contain any liquid unless a tiny tincture is added.

Nedley says salves can be applied to ease any kind of skin ailment: eczema, poison ivy, bug bites, bruises, cuts, scrapes, etc. Salves are preferable to say, a lotion, because lotions are often made with questionable ingredients, whereas “salves are pretty straightforward,” she said.

Nedley makes one infused with CBD that is rarely in stock. It’s called “Blue Moon” and it “lulls you to bed.” She recommends rubbing it on the bottom of the feet for quick absorption. She makes another one, the “All-Healing Salve,” that’s made with five different plants she harvests wild on the Island.

Experts like Nedley and Dr. Knapp remind us there’s a pretty robust apothecary in our own backyards. “It’s always nice to forage your own medicine locally,” Knapp said. “We have so many amazing things on the Island.” When foraging, she said, it’s important to remember proximity to the road, and make sure you’re not in an area that’s sprayed with any pesticides.

Yarrow grows as a weed all over the Island. It’s an astringent herb, which means it’s drying and good for swelling, Dr. Knapp said. Internally, it can help with drying out tissues or with excess fluid for conditions like edema. Yarrow is an antimicrobial and helps the immune system “battle anything you might be dealing with,” Knapp said.

Blackberries and blueberries are also native to the Island. Berry leaves are nutrient-dense and high in cannabinoids, so it will help support the immune system and decrease stress.

Nettle leaves are a great herb for allergies and are also nutrient dense, according to Dr. Knapp. “We live in a world where farming soils are somewhat depleted of minerals,” she said. “So harvesting a wild herb like a nettle and making an infusion is a great way to increase minerals in the diet.”

Wild mint and lemon balm, which are in the same family, are nervines, so they calm the nervous system. “Lemon balm is a great antiviral, so it’s a good thing to consider if you’re dealing with going back to school,” Knapp said. Mint, she added, is a great choice for calming the nervous system and digestive tract.

If you’re making a salve, combine the oil with the wax or cocoa butter/coconut oil. Heat in a double boiler until the beeswax melts and the oil is integrated. Pour the blend into tins while hot. Let the blend sit until it firms up. Voila! You have a salve. 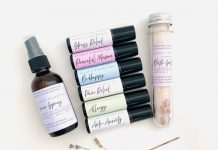 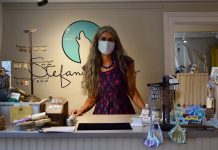 Made on MVY: Beaded Mask Chains by Stefanie Wolf 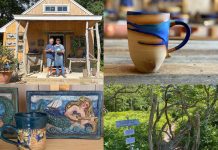