Ralph E. Sherman of Chilmark passed away on Saturday evening, April 3, 2021, at Brigham and Women’s Hospital in Boston. He was 88 years of age. 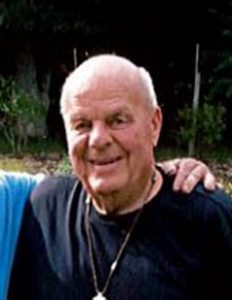 Ralph was born on April 25, 1932, in Fall River to Alfred W. and Hannah (Griffiths) Sherman, and grew up in Berkley and Dighton. He graduated from Dighton High School, where he excelled in sports and was on the state champion football team.

Ralph was married in 1965 to Ethel May (Judge) Sherman while living in Berkley; they met while working in farming research.

He worked in research farming and gardening for Russell Babbit in Berkley and then as a maintenance man for high-pressure gas lines for gas companies in Brockton and New Bedford.

Ralph and Ethel moved to Martha’s Vineyard in 1973 to run the SBS Grain Store in Vineyard Haven, across from the Steamship Authority, and managed it until after it moved to State Road. They retired together as co-managers in 1988, after seeing the business move from the red to the black. Ralph continued to work part-time until 2001.

He enjoyed fishing, and was a constant Derby fisherman from 1958. He enjoyed sports, and played for the Baseball Twilight League until he was 32. Ralph was an avid duckpin bowler, and was always sought out for his knowledge in gardening and farming. He could be seen at the West Tisbury Farmers Market with his vegetables, while Ethel would be selling her jams.

He was predeceased by his wife, Ethel, in September 2014. He is survived by a stepson, Richard Bensing of Arkansas, and a niece, Andrea Pontes of Berkley.

A graveside service for a burial of Ralph’s remains will be held at Abel’s Hill Cemetery in Chilmark on Sunday, April 18, at 1 pm.

Donations in Ralph’s memory can be made to the Martha’s Vineyard Agricultural Society Program Scholarships, online at marthasvineyardagriculturalsociety.org or by mail at P. O. Box 73, West Tisbury, MA 02575.