The Voyager program, which is a transitional program at the Martha’s Vineyard Regional High School (MVRHS) for students with disabilities between 18 and 22 years old, has been working hard in both the classroom and the kitchen to keep up with the constant influx of orders for their new dog treat business, Purple Paws.

Voyager Grace Carroll, who has been in the program for the past two years, enjoys making the treats. “I like it when I make [the cookies] myself. When I do it I feel happy,” said Grace.

The Voyager Program, which focuses on getting students involved in the community so they can identify hobbies, interests, and most importantly future jobs, first started Purple Paws in March of 2020. The first batch of dog treats, made on Friday March 13, never even had a chance to cool before administration announced the pandemic-related end of in-person classes.

Special education teacher Jen Woods, who runs the Voyager program, said her students have been attending school fully in-person since September. “Right when they came in we were like ‘ok let’s start the dog treats again!’ because a lot of the places we typically worked with told us that, because of COVID, we couldn’t go any more.”

Luckily, the multifaceted business style of Purple Paws, which involves baking, packaging, and selling the treats, has proved to be a comprehensive learning experience.

“Part of what we do is teach the students life skills like kitchen safety, and step-process, which they can use when they graduate from Voyager,” said Ms. Woods. “Purple Paws does that. For example, maybe they want to work somewhere, like the post office, or a clothing store. The social skills they learned from selling the dog treats can help them there.”

Voyager Justin Corl said, “I like decorating the bags with the [labels].” He added that the hardest skills for him were making the dough and stamping the treats with the paw imprint.

Baking and labelling the treats aren’t the only skills Justin and his Voyager peers, Grace and Andres Sanchez-Roa, are learning. They are also adding kitchen safety, measuring, and even money management to their repertoire. With aid from MVRHS Finance Director Suzanne Cioffi, students have been counting their profits and learning to fill out deposit forms.

Because Purple Paws is currently considered a school club, the profits will be used to fund activities and purchase items for the students. “We could buy them t-shirts, we could take them on a trip, we can do whatever we want with the money as long as it is going to them,” said Ms. Woods.

Purple Paws began with the intention of selling dog treats solely to high school staff, but now sells to anyone and everyone who places an order on their website. They even give interested customers a free sample for their pups to test out.

Assistant Principal Jeremy Light said, “They gave me one to try and I brought it home and they were great! My dog loves them and prefers them over other treats. I am on a weekly plan now and get deliveries every week.”

Mr. Light isn’t the only person at MVRHS on a weekly plan for the dog treats. Math teacher Melissa Braillard has also been ordering treats for about three months now. “They are great, they are natural, they are made here at the high school, and my dog loves them,” she said.

Looking to the future, Ms. Woods said Purple Paws is hoping to expand. “We want to go outside of school so we can actually have a business where people with disabilities can work and earn a paycheck. Then we would want to bring [the Voyager students that are still in school] there to learn employment skills.”

Almost all of the work of Purple Paws is done by Grace, Justin, Andres, Ms. Woods, and ESPs Kendall Robinson and Hallie Britt. However, the Voyagers have gotten some outside help from members of the MVRHS Best Buddies club as well.

Best Buddies meets the Voyagers in the library during Flex a few times a month to assist however they can.

Recently, junior Owen Amodio has been helping Andres with packaging the treats. He said that one of the best parts of Purple Paws is that it allows the Voyagers to work on a range of different skills. “I think it’s pretty manageable for the students participating, because they can work on one step at a time,” said Owen.

Owen, who has high expectations for Purple Paws in the future, said, “It’s very scalable. I can see them expanding over the summer and becoming an actual business.”

For Grace, starting a business at school has been a positive experience. “I love Purple Paws. It makes me feel good to do,” she said. 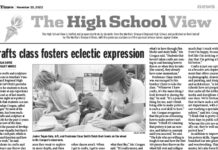 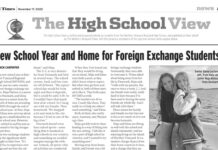 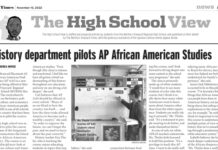