People on Martha’s Vineyard are more conscious about the impact of human activity on the natural environment than ever before.

With the economy of the Vineyard’s coastal community relying so heavily on the health of the world’s oceans and its local estuaries, and with sea level rise threatening the very viability of living here for future generations, people are taking it upon themselves to be stewards of Martha’s Vineyard whenever they can.

“At first, there were a number of beaches that were getting lots of plastic on them. These days, it seems maybe people are getting more conscious about not throwing their garbage out of their cars or into the woods when they are taking a walk, or maybe they are feeling more inclined to pick up trash if they see it,” Leighton said.

However, Leighton said the nip bottles are ubiquitous alongside roadways and on beaches. “We find tons of plastic bottles each year, along with discarded beach gear, small refrigerators, televisions, lots of fishing gear.”

Leighton said the reason she goes out to pick up trash on cleanup day is because she cares about the health and natural beauty of the Island, and wants to make a difference in whatever way she can. “It’s definitely something special you see here — people know this is a beautiful and unique place, they want to keep it that way,” Leighton said.

She noted that the vast maritime history of Martha’s Vineyard “demands” that people pay attention to the well-being of our oceans, especially because we will see the effects of sea level rise and climate change before inland communities, and even many other coastal areas.

Even though Earth Day and the cleanup are important for raising awareness, Leighton said, she hopes to create a year-round focus on protecting the environment. “Being able to go outside, take your family for hikes, go for a bike ride, those are things that we can’t take for granted,” she said.

Sheriff Ogden was propping up an old car tire he found on the beach next to a bag of litter when he said, “The driving thought to bring home is that we are ambassadors to the Island, we are its caretakers, we are the community that lives here and raises families, and we need to take care of our environment here.”

During COVID, Ogden said, there has been an increase in alcohol use — illustrated by the many nip and beer bottles littering beaches and roadways.

For Ogden, being a steward of the environment isn’t just an inclination — it’s an obligation, borne of the privilege of living in such a beautiful yet environmentally sensitive place.

“There’s an obligation of everybody to be civically minded;, it’s an obligation that is inherent of our living on this Island, and if we want to keep it like this and make sure that it’s beautiful for the next generation and the generations after that, we have an obligation to get out here, get our butts into the woods and onto beaches, and keep the trash out of our environment,” Ogden said.

He said that while the Massachusetts Department of Transportation and the Sheriff’s Office normally have litter cleanup crews come from the jail, that isn’t as easy with COVID protocols and distancing restrictions.

“We usually would have a lot of the roads handled before the spring and summer roll around.

Because of COVID, we found that the workforce from the jail isn’t available to us as much anymore. But the Sheriff’s Office is committed to still cleaning up the roads,” Ogden said, and added that the department has deputies who go out and pick up litter on their own.

“They aren’t watching someone else do it, they are actually picking up garbage for the community. It’s all of us coming together, whether it’s just private citizens or professionals,” he said.

Instead of having Earth Day or Earth Month (April) be the only time some people focus on the environment, Ogden said, he hopes environmental health can be at the forefront of everyone’s mind year-round. “We aren’t looking to just clean up our Island. We want to encourage a new way of thinking about our world. It shouldn’t be just one day, it should be every day,” Ogden said.

Christina Simmons was picking up trash under the drawbridge with her family toward the end of the cleanup. She said she comes to Eastville Beach often with her family during the summer, and has chosen this particular beach to clean for the past three years they have participated in the event. “We have lived on the Island our whole lives. I’ve noticed a lot more plastic bottles and food containers, but I don’t know whether I am just paying more attention now, or things have actually gotten worse,” she said. “Either way, we are happy to be out here as a family, keeping the beach clean so we can keep coming here.”

Bart Partington was also diligently looking for discarded trash along the shoreline. Partington is the vice president and treasurer of the VCS board of directors. Although the plastic problem on-Island is his primary concern, he said, many environmental issues are inherently connected.

“Water quality, biodiversity, climate change — these things are all related. It takes initiatives like these in order to get people thinking about how our choices affect the environment,” he said. 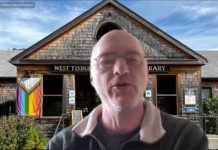 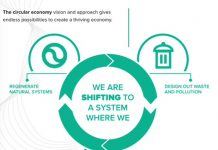 Climate Solutions: Moving toward a circular economy — a regenerative approach 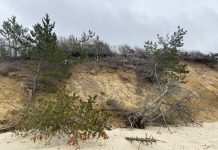