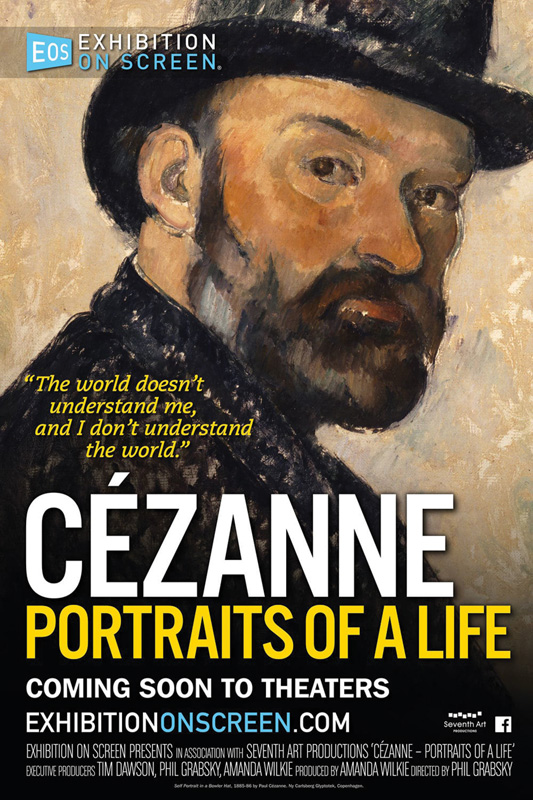 “Cézanne: Portraits of a Life” comes to the M.V. Film Center (and also virtually) on Thursday, April 29. This TV documentary, directed by Phil Grabsky, concerns how the artist’s portraits convey his life. Cézanne is best known for his still lifes and landscapes, and as the post-Impressionist who laid the foundation for modern art in the 20th century.

With commentary from the directors of the National Portrait Gallery in London, the National Gallery of Art in Washington, D.C., and the Musée d’Orsay in Paris on Cézanne’s many portraits, the film gives careful attention to the artist’s paintings. They take the viewer through Cézanne’s life.

Many of his letters to Emile Zola, with whom he had a deep and lasting friendship, as well as with others, are given voice to help discuss the paintings. Cézanne was articulate, as illustrated through his letters. He was particularly well-versed in literary works, loved music, and wrote poetry as well.

He divided his time between Paris and Aix-en-Provence, and studied the old masters at the Louvre. Although he submitted work to the salons that chose what they considered the best of current work, he was repeatedly rejected. Frustrated, he said, “I wish to appeal to the public.” His great-grandson Philippe observes that rather than primarily being aggressive, angry, and lonely, Cézanne was in fact a cheerful person.

Supported financially by his father, Louis-Auguste, a hatmaker and then wealthy banker, Cézanne spent summers in Aix at the military mansion called Bastide du Jas de Bouffan, which his father bought for the family. His father was the richest man in Aix. Cézanne attended the University of Aix law school at the behest of his father, but he disliked it, and left in 1861 at the encouragement of his friend Zola. He also was admired by and friendly with Camille Pissarro, who served as a mentor.

The film calls attention to Cézanne’s use of brushstrokes and the materiality as well as subject in his portraits. Marie-Hortense Fiquet became the model for many of his portraits, and was his mistress, then wife. She was also the mother of Cézanne’s son. After his father reduced his monthly allowance, Zola helped support him. Eventually he inherited properties from his father that allowed him to paint without needing to support himself through his art.

One interview describes how he gave dignity to ordinary people, as in “The Card Players,” of which he did several paintings. This contrasts to the convention at the time of making portraits of celebrated and rich individuals. He is also said to have painted portraits of his wife and others like still lifes. “The Boy in the Red Vest,” now owned by the National Gallery of Art in Washington, relies on the one paid model Cézanne used, Michelangelo de Rosa. Considered one of his finest portraits, and on a par with Rembrandt’s work, it illustrates how the painter used a multitude of different planes in rendering his portraits.

What makes “Cézanne: Portraits of a Life” so successful is its careful observations of his portraits in both close-ups and pans, as well as the employment of his letters to describe his thoughts and friendships. Cézanne was a true genius, a revolutionary, and an artist largely responsible for the transition between post-impressionism and modern art of the 20th century.

Information and tickets for “Cézanne: Portraits of a Life” at the M.V. Film Center and virtually are available through mvfilmsociety.com.