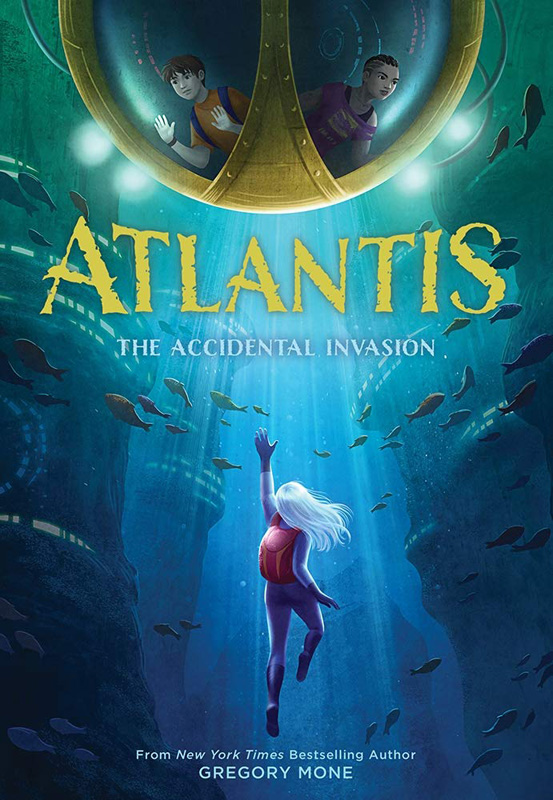 Vineyard resident Greg Mone has written an intense and phantasmagorical young adult novel of a future world in the U.S. after the climate change wrecking ball and Atlantis, an undersea world far older than ours.

Mone’s “Atlantis: The Accidental Invasion” is a perfect example of the reason the author is a fast-rising New York Times bestseller in his genre. Frankly, like “Fish” and his other books, “Atlantis” is a very satisfying read for old people as well. The reason for that is Mone has researched, and explains, two worlds that do not (yet) exist. They are believable and filled with high-tech advances.

The teenage protagonists are precocious eye-rollers, and, of course, fearless, as teengers tend to be. Mone knows his characters, busily raising 10, 13, and 15s on the Island. “I know the drill,” Mone noted humorously in an email exchange with The Times.

We open in a close future in which the coasts of America have become uninhabitable as a result of frequent tsunamis that have destroyed the country’s shorelines. The nation’s capital has been moved to the Midwest, away from our oceans.

We meet Meriwether Lewis Gates, an intrepid 12-year-old who’s stowed away in his crazy scientist dad’s hovercraft — a mode of transportation that we will use as we do cars today — in hopes of discovering his dad’s secret laboratory.

Now, Dad is considered a loon by the science community for postulating that Atlantis is real. He came to that conclusion after studying the tsunami syndrome, and concluding they were the work of another sentient world.

Gates lives with his mom, half-brother Michael, and stepdad Robert, and is committed to getting attention from his own dad, who’s well-meaning but, well, forgetful. They arrive at the lab, which contains a subsphere designed by college graduate Hannah, who’s working on her master’s degree at 14.

Another tsunami shows up and whisks them out to sea in the subsphere. They are going to Atlantis willy-nilly.

Down below, Kaya, 14-year-old daredevil, is also convinced by tales told by ancient storytellers, that another world exists above them, and by God, she’s going to find it, using her gravity drive that allows her to soar above streets teeming with more than a million Atlanteans. She also wears an instant-drying, thin, inflatable dive suit that allows her to navigate Atlantis’ watery byways. As might be expected with technogear and evolution, Atlanteans are very good at swimming. Their slight frames and large eyes have adapted to a murky undersea environment.

Kaya and her friend Rian meet up with the Sun People — the prof, Hannah, and Lewis — and the excitement begins. Atlanteans are ruled by a high council, which knows of the Sun World but takes extreme measures, using a nasty force called the Erasers, to make people who dispute them go away in their enclosed world.

We don’t reveal plot endings, but rest assured the experience is wet, scary, and occasionally grungy.

But it turns out our U.S. leaders do know Atlantis exists and pooh-pooh science claiming otherwise. We use the Patrol to monitor for Atlantean incursions. And yes, Atlantis has used tsunamis to attack our shores, as mountains and miles of our refuse fouled the watery environment they need for oxygen and sustenance.

Mone has created wonderful family and collegial dynamics between his characters, and weaves in the importance of remembering history as life lessons for his audience.

And Mone has created a techno-possible environment for both worlds, an enjoyable moment for him. “Yeah, it took time, but it was one of the most enjoyable aspects of the research,” he told The Times.

This book begs for a sequel, perhaps a trilogy, and Mone has those planned. Along with a sequel to “Fish,” his 2010 bestseller.

“Atlantis: The Accidental Invasion,” by Gregory Mone, $17.99. Available through Bunch of Grapes Bookstore and Edgartown Books.

One film about endlessness, and another about growing old