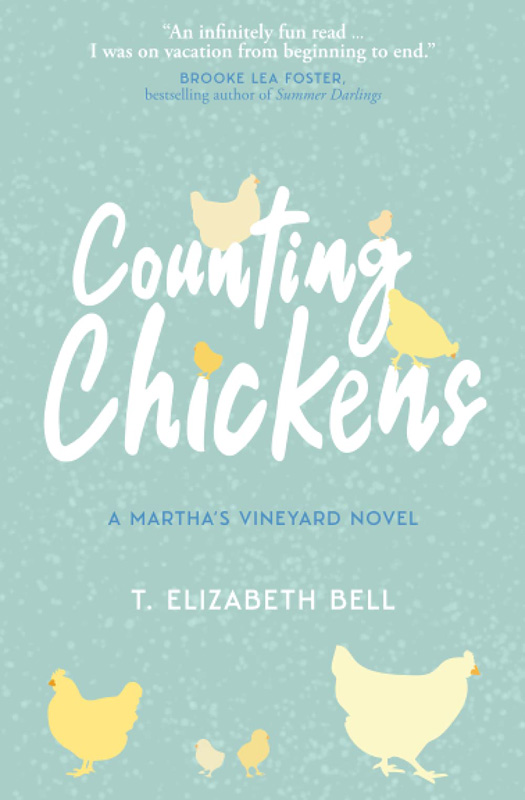 Having read T. Elizabeth Bell’s “Goats in the Time of Love,” I was thrilled to dive into her newest jewel, “Counting Chickens: A Martha’s Vineyard Novel.”

Like her first book, animals are featured in Bell’s novel, and have to do with one of the main character’s means of making a living. The Crested Cream Legbar chickens belonging to the endearing protagonist Remy Litchfield are integral to the high-end provisions (and services) she provides in her exclusive concierge business called Nest, which she is struggling to get off the ground.

Remy’s promotional materials say: “When you hire Nest, you are hiring 24-7, personalized attention to your every need. Our goal is to ensure that you, your family, and your guests have the best vacation possible while on Martha’s Vineyard.” In addition to fresh, home-hatched eggs, she takes care of her super-rich and primarily spoiled clients’ every possible need at all hours of the day, from stocking their refrigerators with gourmet food to homemade special floral arrangements; impossible-to-get restaurant reservations; fixing the outdoor shower; and taking care of an ornery, disaffected teenage daughter and her horse when her snobbish mother is too busy to care.

Bell is expert at transporting the reader with tangible specificity, not just to the Vineyard’s sights, sounds, and exact locations, but also to the conflicted relationship between year-rounders and some of the uber-rich seasonal folks on whom the Island economy so heavily relies for income.

Juggling her demanding clients’ needs, Remy, who has sworn off the complications of a relationship during this crazy-busy summer, nonetheless finds herself tangled up with not one, but two men. Navigating both her feelings and the logistics makes for an amusing storyline that keeps us turning pages to discover what this unpredictable protagonist will do next.

I’ll withhold the identity of one of the men, as it would be a spoiler to disclose too much about him, but let’s say the relationship is tempting, a bit naughty, and risky to her professional reputation. The other is Jake Madden, whom Remy had an unrequited crush on during their teenage summers on the Vineyard. While sparks sizzle, he, an erudite college professor on sabbatical seeking tenure, can be intellectually pompous and annoyingly patronizing. The push and pull between them makes for some engrossing sparring, and Bell keeps you guessing about how things might unfold.

She also creates a completely appealing circle of eccentric friends who are often reminiscent of the kind of characters you see — or at least believe exist — in the year-round community. It’s always a pleasure spending time with them as they interweave throughout the narrative. For example, there is the entertaining early scene where we have one of Remy’s “hippie-esque” friends Teddy, who has taken ‘shrooms and is walking naked down State Road by Alley’s. Bell explains, “This came to me in one of those early half-awake/half-asleep states where I get a lot of my ideas. Unlike a lot of authors, I don’t write out a detailed outline of the plot ahead of time — so I had a rough idea of all the characters finding what they needed to be happy. If I outline too much, I find it interferes with my ability to create and visualize scenes and ‘hear’ dialogue between the characters. So I end up doing a lot of rewriting and editing.”

Bell writes authentically about the Vineyard, which makes sense, as she has long had ties to the Island. She explains, “I came to the Island for the first time when I was in grad school, and I totally fell in love with the Vineyard on that first trip. My (now) mother-in-law joked that if any of Chris’ girlfriends came back for a second visit, that would be the girl he married (and she hoped I would be her). But I remember crying when I left because I was pretty sure I wasn’t that girl, and might never be back. But as fates would have it, I was wrong! After coming to the Island as a summer visitor for decades, I am now lucky enough to have the flexibility in my personal life to live here for half the year.”

She continues, “But ‘Chickens’ isn’t just about the sometimes-fraught relationship between summer people and locals — that is just the backdrop. It’s mostly about the challenges of breaking through preconceptions and self-imposed barriers to happiness, the value of friendships, and the power of love.”

“Counting Chickens: A Martha’s Vineyard Tale” by T. Elizabeth Bell. Soon to be released; will be available at Edgartown Books, Bunch of Grapes, and online by searching the novel’s full title.