Esther A. Casey, “Mimi” to all who knew and loved her, passed away peacefully on May 7, 2021, surrounded by family and her beloved pets. 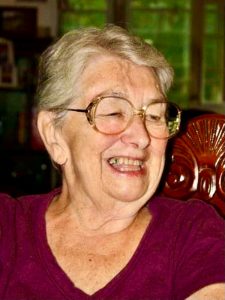 Mimi was born in Providence, R.I., on March 11, 1927, one of 10 children. Her family moved several times, but Mimi spent much of her younger years in Somerville.

After high school, Esther went to work at Stone and Webster, where she met John H. Casey, an engineer with the firm. According to the family legend, Esther saw John one day in the hallway and went over and gave him a hug because she “couldn’t resist hugging him in his red suit.” John went back to a friend and said, “I was walking down the hall, and some girl I don’t know came out of nowhere and hugged me.”

Shortly thereafter, John invited Esther to a movie, and the two fell madly in love. Within five months they decided to marry, though everyone thought they were crazy, and remained happily married until John’s death in 1998.

Once married, Esther and John moved into the family home on Walnut Street in Natick, joining John’s father, his siblings, and their spouses under one roof. Eventually they purchased the Walnut Street home from the other siblings to make it their own.

In 1952, John and Esther welcomed their first son, John H. Casey (“Jack”), followed in 1959 by their son Donald M. Casey. They continued to raise their sons in the family home until the boys became adults and moved on to their own homes. In 1999, having lost John, Esther moved to Martha’s Vineyard, to live near Don and his daughter, Kiana, who had by then dubbed her “Mimi.” She purchased a house in Edgartown, and filled her days by helping to take care of Kiana when she was not in daycare or school. The two were as thick as thieves, and remained so, even as Kiana became an adult. In 2007, with failing eyesight, Mimi moved in with Don and Kiana, always being there for the two of them while also helping to keep the house running smoothly.

Their treasured German shepherd, Bella, joined the family in 2010. Mimi was the center of the family, around whom all worlds joyously revolved. When Don married Gail Gardner in 2014, Mimi became a mother and grandmother by proxy to Gail and her kids, Riley and Amelia Craig, as well as caretaker to their pets Brinkley, Chester, Bear, and Hallow.

Mimi’s health declined in the past few years, and recently she was being cared for by Hospice nurses Celine Maney, Susan Nugent, and Cheryl Kram, as well as CNAs Nancy Gaspar Brown, Kim Gaspar Johnson, and Corinne Dorsey. She was also under the watchful eye and excellent care of Dr. Mike Michotek for a number of years. The family is eternally grateful to everyone who helped make Mimi’s final days and weeks easier.

A private service was held on May 22 at Dell Park in Natick, where Mimi was laid to rest next to her beloved “Buddy Boy.”