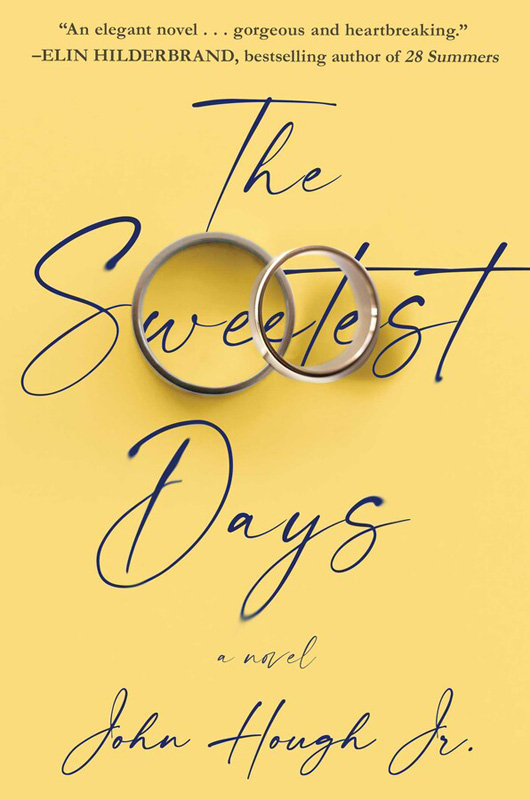 In “The Sweetest Days,” his sixth novel, the West Tisbury author and writing coach displays a sweeping literary range unconstrained by the limits of real history in his other recent awardwinning works (“The Little Bighorn” and “Seen the Glory”).

We meet Peter and Jacqueline Hatch, a successful couple in their 60s. Retired from years of high-wire careers in Washington politics, we meet them as they arrive in Dunstable (think Falmouth), where he’s been invited to read from his first novel at his hometown bookstore. Three days after that, he and Jackie will drive to Mass. General Hospital in Boston, where Jackie will undergo a radical mastectomy.

They hope surgery will remove the deadly tissues. Her doctors have given her a 60/40 percent chance of beating it. Peter is positive and upbeat. Jackie’s not so sure. Peter is pretty sure his book signing will be a disaster. Jackie is upbeat and positive.

As you might expect, Peter runs into old pals in Dunstable, and Hough uses the opportunity to time-travel back to the 1960s, when Jackie and he were sweethearts with a future together assured. Until he met Corinna, a more worldly and exotic creature than he’s ever known. He is besotted. They would know each other for one day.

Pete and Corinna come together at a food drive organized by ministers from a local youth fellowship. The drive is in support of a food boycott by a Black community against a white store owner who is overcharging them for food they cannot afford.

While the youth fellowship members pledged support, only three showed up. Peter, the ever-malevolent classmate Adrian Denton, and Corinna, who is Adrian’s cousin visiting for the weekend. Jackie refused to come because of her father’s opposition to this “communistic” project.

Peter and Corinna are paired. During the course of the day, they fill the Galaxy belonging to Pete’s father with food, and collect $200 in cash from one uber-rich couple. Corinna sees her chance. She is pregnant by a boyfriend she doesn’t love enough, and has decided on an abortion. Does Peter know doctors who can help? He calls the local doctor, who knows another local doc who does the procedure. After the food drive, Pete drives her to the abortionist. He botches it. Several hours later, Pete is roaring down Route 26 (think Route 28) to the hospital when he rear-ends an abandoned truck on the road’s shoulder. He is thrown clear. Corinna dies. Pete never reveals the circumstances leading to the crash. Ever. To anyone. He crashes and burns psychologically, is sent overseas, and he and Jackie don’t see each other until a chance meeting 11 years later on a Boston street. They marry three months later.

While reading at this point, I was reminded of an opinion from my oldest and dearest friend, Ronald Kasmouski: “We have to find a safe place to put things like that, or they’ll eat us alive.” Pete found a place. Adrian Denton didn’t, and became a vicious old churl of a man who burst in on Pete’s book signing, and screams questions that Jackie WILL have Peter answer. What follows is more drama and action than you would expect from average 60somethings.

Now, Hough is a dialogist. He believes dialogue moves character and plots along in ways discursive prose doesn’t. It’s hard to do. But Hough’s characters reveal the hard-to-see places in them, inaccessible except through their own words. No false notes here, quite something really.

You may see this as a beach read, but you will change your mind as you read it. It’s not a book to be sipped 10 pages at a time with one eye on the kids or grandkids. Because it’s a book about choices, and what love is, and how we handle those questions and choices. A book to be inhaled, like a “Catcher In the Rye” for adults. If you are old or plan to be, you need to read this one.

The Times caught up with Hough in his West Tisbury aerie last weekend, and asked a couple of questions about his new novel, namely what was the driver for writing this?

“I thought it was the only way to handle that food collection story. That part was real. The youth fellowship was real, Sondra and Martin, the ministers were real. Only three kids showed up. It was the beginning of the end for Sondra and Martin; my girlfriend’s father wouldn’t let her come,” Hough explained. “I’ve tried for years to tell it, including as a short story. So in a funny way I constructed the novel at a halfway point, working back. I always wanted to tell it. It took three drafts and creating the Corinna character to get it right.”

The nexus of the novel seems to me to be those unanswerable questions about choices, decisions, what love is and looks like.

“Absolutely,” the author said, “we feel that at our age, no matter how happy we are. The what-ifs, the roads taken and not taken. You always regret the things you didn’t do, but as Jackie tells Pete, not doing something is as much of a choice as doing it. ‘It’s a choice either way,’ she says.”