The mantra behind the Peter Luce Play Readers group, long hosted live by the Tisbury Senior Center until the pandemic hit, is “The show must go on.” This large but tight-knit group of people have had to pivot from meeting weekly to a Zoom format and a reduced schedule.

Normally, when the players meet in person, they follow a monthly leadership formula, in which a volunteer “producer” selects a theme and the plays. Then the individual directors “hire” the actors, who step up on a volunteer basis as well. Each player reviews her or his lines by themselves, and then there is a reading in front of the group on their assigned Wednesday morning. Afterward, the director leads an often rousing group discussion, which all the members feel is one of the most treasured parts of the experience.

As of Wednesday, May 26, the group will have put on five plays since the pandemic started. Myra Stark, who has been in the group since about 2003, and is playing a part in the upcoming show “Death of a Salesman,” explains that unlike the in-person version, the Zoom format requires a rehearsal because of the technical aspect. “I’ve had to annotate my script to indicate mute, stop video, and start video when I come back on the screen,” she says. “That’s the most difficult part of it. Inevitably, somebody has a technical issue.” For instance, during one of the main actors’ last big scene in “Angels in America,” her computer went down.

Roberta Hurtig, who stepped up to run the webinar version of Zoom for the productions, is also one of the people who has directed plays and acted in them. “Thank goodness for Zoom, because we’ve still been able to enjoy play reading. We’ve still been able to capture that sense of community and reading good plays and being able to discuss them,” Hurtig says. But she laughingly recalls her own experience with the hazards of relying on technology: “One time, I’m reading my part, and suddenly everything goes dead. The cable line to my house, which I guess was under the street, a truck somehow pulled it out, and my landline, television, internet went completely gone. The good news is that other people picked up my part and continued on.”

Gaston Vadasz, a frequent player, says about his pandemic experience, “It has been tough! The greasepaint has dried up, the voice lost its resonance. It is not necessary to shave, or even shower (social distancing)! We now Zoom, often forgetting to mute or unmute ourselves. It took months to learn the intricacies of performing to your own laptop.”

Linda Vadasz, along with Gaston, joined in 2013. “It’s been difficult, because we are like a family,” she says. “Doing it on Zoom, we don’t always have time for the discussion afterward, which is in some ways the best part of each week. There are some people who know everything about theater, and it’s delightful to hear their anecdotes about the plays, the actors on Broadway, the authors.” When Linda acted in her Zoom production, she recalls, “We all decided to wear black unless we had some type of prop, like a hat, because there was no way to do costume changes via Zoom. It’s been a challenge, but we’ve been through it, and we look forward to meeting in person.” On the other hand, she admits that Zoom allows you to attend in your bathrobe.

Bari Boyer, who has been coming for about five years, says, “Before, if you were in the play, we rehearsed by ourselves at home. But the technology component requires rehearsal together, because you have to practice when you go in and out, when you mute and don’t mute. As an audience member, though, I like it, because you can really see the close-up of people’s faces better than you do in a room with 30 people in it. I sort of prefer it, but I know people are eager to get back together because they appreciate the sociability of it.”

According to Stark, the June production will be outdoors, held at one of the member’s homes, and will allow for that sociability we all crave. After that, it’s unknown. The Senior Center has invited them back, but there are details that would need to be worked out. The group doesn’t want to limit attendance size and or require actors to wear masks. “Masks are impossible,” she says, and continues, “the audience can’t hear anybody acting through a mask. At the best of circumstances, we miss hearing things. We don’t know if they will loosen up those requirements. But when we can, we’ll go back. It will happen.”

“When I started there, I was just an audience member,” Boyer remembers. “I was very shy about volunteering to take a part. But people encourage you to try it, and you gain some confidence.”

And she reminds us, “There are no small parts; they’re all important parts.”

If you want to participate onstage or off in this community theater with a twist, and/or learn about the where and when of the June production, call Myra Stark at 617-275-9105 for information. 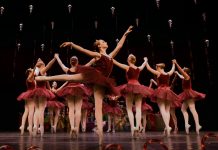 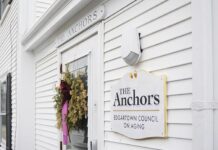