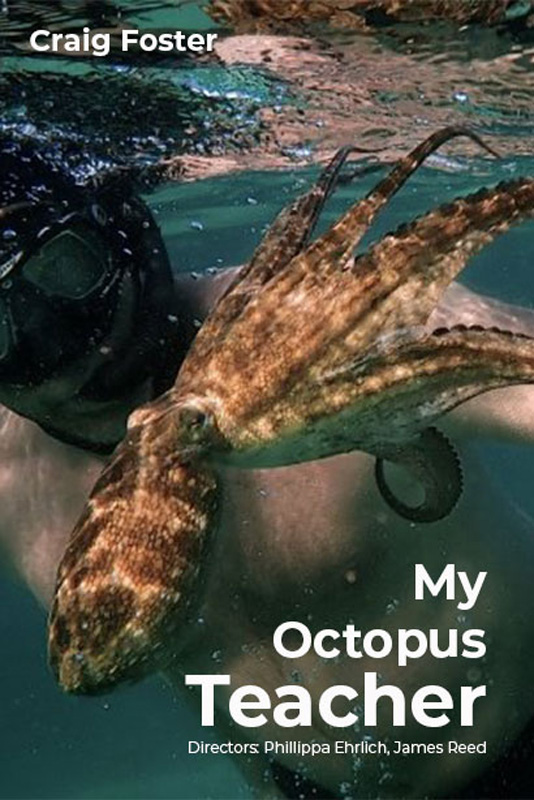 “My Octopus Teacher” arrives at the M.V. Film Center on Friday, June 4, and also screens on Tuesday, June 8, for World Ocean Day. This delightful documentary, written and directed by Pippa Ehrlich with South African filmmaker James Reed, follows a diver’s experience with the eight-legged creature swimming in a kelp forest off the southern tip of South Africa. The film won a 2021 Oscar for best documentary feature. Cinematographer Roger Horrocks beautifully captures this scenic underwater world full of colorful fish and other ocean denizens.

Finding relief from the demands of work on earlier films that had led to burnout, diver Craig Foster, a nature documentarian and Cape Town resident, swims regularly in the South African ocean, where the kelp forests keep the waters calm. While exploring without wetsuit or snorkel despite 50° temperatures, he discovers a small cephalopod mollusk under its hideout of shells and finds this female octopus (male octopuses die soon after mating), incredibly intelligent and curious.

“I remember the day when it all started, seeing this really strange thing,” Foster says. “It’s a hard thing to explain, but sometimes you just get a feeling and you know there’s something to this creature that’s very unusual. There’s something to learn here.”

He decides to start following her every day, and begins to learn about her daily activities, which include hiding from predators and eating crabs and lobsters. “A lot of people say an octopus is like an alien. But the strange thing is when you get closer to them, you realize you’re very similar in a lot of ways.” Foster decides it’s time for a radical change in his life, and that the only way he knows how to do it is to be in the ocean with her.

At first this critter is shy, and fearful of her human pursuer. Foster, however, is persistent in following her, and gradually she begins to feel comfortable around him, eventually reaching out and touching his hand with one of her tentacles. At one point she escapes from a whitetail reef shark who attacks her, and it actually slices off one of her tentacles, which she is able to regenerate. Meanwhile, preoccupied about his relationship with his son, Foster encourages him to join him and develop a better understanding of underwater life.

Much like the M.V. Environmental Film Festival’s “Gunda,” “My Octopus Teacher” immerses the viewer in animal life. The difference is the lack of any human relationships in “Gunda.” That difference makes “My Octopus Teacher” more about what Foster learns from his unique relationship with the mollusk. Some viewers may find the film a bit sentimental, but for most others it is a poignant, fascinating tale.

Information and tickets for “My Octopus Teacher” are available at mvfilmsociety.com.