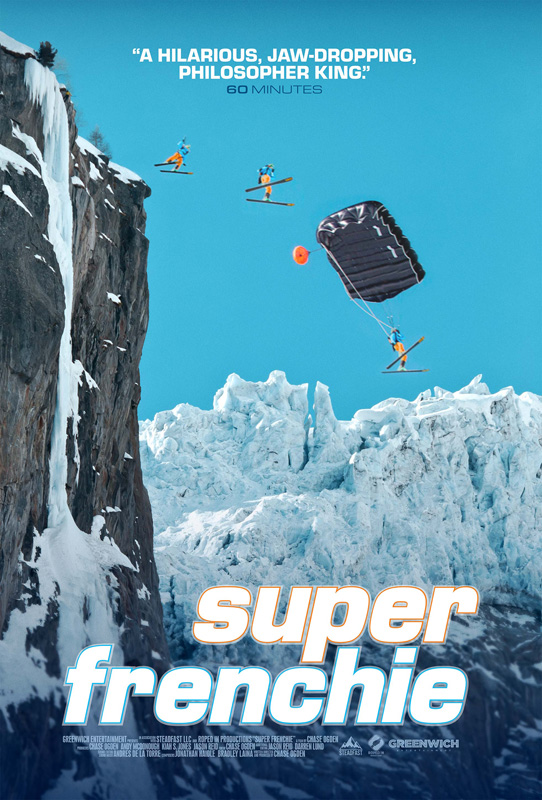 “Super Frenchie,” a documentary about French-born extreme skier Matthias Giraud, is playing virtually at the M.V. Film Society. With summer weather arriving on the Vineyard, this film is a cooling pleasure to watch.

The film opens with Giraud skiing down a slope, performing a BASE ski jump over death-defying snow cliffs, followed by parachuting the rest of the way down. Then he is shown walking down a street with a suitcase and carrying skis. He explains that this extreme form of BASE ski jumping is his life’s mission — to promote skiing and inspire human adventure. He recognizes the calling involves potentially life-threatening injury, or even death. When fellow skier and mentor Sean McConkey died, Giraud found his death hard to take. “You can’t let fear stand in the way of your dreams,” he says. “Skiing is a big life force in my life.”

In an interview with Giraud’s mother, the viewer learns Giraud’s passion for skiing began when he was 19 months old. “He loved risky things,” adds his doctor father. Giraud was 4 years old when he took his first ski jump. “I remember it like it was yesterday. I love speed. I love air. That hasn’t changed much,” he says. “It’s something inside you.”

The film shows him BASE jumping past a waterfall. “That becomes the meaning of being a man,” he explains. From discussions about Giraud’s family, the viewer learns that an aunt committed suicide, and his sister first attempted, then succeeded at killing herself. “Her death made me more alive in a way,” he says.

Giraud’s serious ski jumping began in 2007, and it became a way of coping with his family problems. He moved into crazier and crazier BASE ski jumping, always having to do riskier jumps. His mother suggests this activity fits him perfectly, and his father says, “He’s a philosopher; he’s trying to find the meaning of life.” A fellow skier and friend describes Matthias as borderline a genius and borderline a madman. His wife Joann explains that she understands BASE ski jumping is something he’s passionate about.

The film follows Giraud during his jumps, including from the Matterhorn, the Eiger, and Mount Hood. Three weeks before the birth of his son Soren, Giraud was BASE ski jumping the alpine peak his family had vacationed at years before when he slammed into its rockface. He suffered a double fracture of his left femur, and a brain injury that left him unconscious as he fell 4,000 feet. After emerging from a coma, he began his recovery in time to see his son born. Three years after the accident, he returned once again to BASE ski jump the mountain where his accident occurred.

This time, before BASE ski jumping again, Giraud decides to write a letter to his son in case he does not return. Death is normal, he observes. “The mountain will decide. In the meantime, we’ll pay our dues and be humble.”

Also coming to the Film Society are the comedy drama “Together Together,” and the musical “In the Heights,” from the creator of “Hamilton,” LIn-Manuel Miranda, and Jon M. Chu, the director of “Crazy Rich Asians.”

Information and tickets for “Super Frenchie,” “Together Together,” and “In the Heights” are available at mvfilmsociety.com.