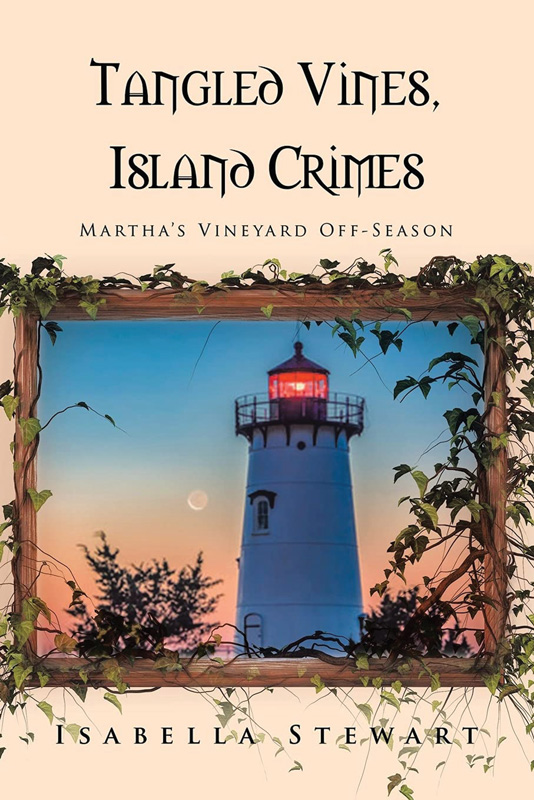 “Tangled Vines, Island Crimes” is a ripping good tale. This is no summer romance or breezy beach read. Its dark storyline takes place after the hordes have gone home, and weaves a complex plot set against the backdrop of a broad mix of year-rounders.

Isabella Stewart, an Edgartown resident for 40 years, captures the tensions that ripple through the Island and its history. “I was fascinated by the divide between different groups living here,” she says. “Certainly, we see the ‘town versus gown’ story, but that is commonplace anywhere. However, on the Island, among those living here year-round, we had divides centered on racial, ethnic, and professional disparities, and there was very little upward mobility — unless you dared to take a chance. I was also fascinated how populations other than the Wampanoags (who were ‘forever here’) came to arrive on the Island. We see the English settlers; the two diametrically opposed groups of Portuguese; the summer visitors; and, finally, the Brazilians. Somehow they each had to push and shove just to make room for each other on this spit of sand seven miles at sea.”

And there is plenty of pushing and shoving to go around. The main protagonist, Maria Keller, Azorean by birth, is embarrassed by her humble beginnings with a mother who cleaned homes and father who gardened for the wealthy residents. Maria is determined to make her mark and build a life beyond her wildest dreams, as the go-to real estate maven for the uber-rich.

But Stewart warns us right up front of the sinister nature of this tale: “This is the story of life in the off-season, of its land that determines wealth and status, and of its white picket fences that hide secrets. It’s the story of how its prolific grapevines grow tangled, and how people get caught in them, unable to extricate themselves from their snarly hold.”

Maria creates an intricate Ponzi scheme worthy of Bernie Madoff, using the palatial empty homes of summer residents as the basis of an elaborate house of cards that she is constantly manipulating to avoid its collapse. Maria shows properties that are not even for sale, forges fake purchase and sales contracts, takes down payments, delays closing dates — using the excuse that everything takes forever on the Vineyard — until the first client in the queue demands their down payment back, which she returns using a later client’s money who “hadn’t yet screamed bloody murder.”

She does other quite appalling things as well, but you will need to read the book to find out what those are. Let’s just say that Maria is ruthless in her pursuit of enough millions to escape the Island with her husband, who is only hanging around because of the money. However, complicit in Maria’s scams — and then some — it is the small-time attorney and wash-ashore Rick Moran who most equally matches Maria for despicableness through his use of wiretapping and extortion to get the biggest bang for his buck.

“A real-life Ponzi scheme on the Vineyard always remained vivid in my mind,” Stewart says. “I knew the person involved in a real estate scandal quite well. In fact, it was suggested that I go into business with her but, luckily, I declined. There was just something I didn’t quite trust about her, and I also didn’t like the way she treated people, other than her clients and the people by whom she wanted to be accepted. But the book is definitely fiction — not every single thing happened, and those that did happen were used as a springboard for the novelist’s imagination. Maria’s fate and those of the others were entirely different from real life.”

The book is aptly titled. Maria and Rick’s greed gets them all tangled up. The “tangled vines” refers to Sir Walter Scott’s (not, as some believe, Shakespeare’s line): “O what a tangled web we weave/ When first we practise (sic) to deceive.” For Stewart, “The picket fences and the tangled, prickly vines became characters, too. The fences stood sentry guarding one’s wealth (property) during the summer months, while the vines became the invaders and thieves, working their way through the picket boundaries and into the unguarded homes in the off-season.

“Besides the theme of tangled, insidious vines, the reader will think of a house of cards and a domino structure, and the skill, precision, and patience needed to build them. The reader will also realize you need a healthy dose of plain luck to succeed. But in the end, your hand will quiver, or you’ll feel pressure and act rashly, and that’s when the Big Bad Wolf blows your house down. Poof!”

Like the Ponzi scheme itself, Stewart constructs a complex tale of rich characters, each with her or his own agenda. But despite its intricacy, we never lose her in the details. Understanding the deviousness that is occurring not only keeps us turning the pages, but it makes us feel quite smart for following the plotline as it unfolds.