On July 21, 2020, Dennis Winthrop Norton passed away at his Vineyard Haven home, surrounded by the tender arms of Hospice of Martha’s Vineyard. 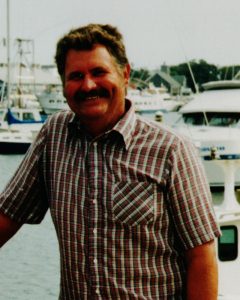 Dennis was born on Oct. 16, 1945, in Vineyard Haven, and grew up in a bygone era of simple Island life. He was the son of Mildred Harriett Legg and Winthrop Mayhew Norton, in a long succession of English ancestors who washed ashore centuries ago. He didn’t care much for book learning, and joined the U.S. Navy after his schooling. He was first stationed in Pensacola, Fla., where he met and married the love of his life, Linda Nell Richmond. He was then transferred to the aircraft carrier USS Lexington in Corpus Christi, Texas. Dennis fondly reminisced about his time in the military, and visited “the Blue Ghost,” the nickname for his aircraft carrier, later in life.

A typical Island guy, Dennis was drawn to the water. He was a lobsterman, first out of a Novi skiff, then upgraded to the lobster boat Sea Foam out of Menemsha. In 1995, he purchased a new lobster boat, the Linda D. Normally not seeking the limelight, both he and Linda had a grand christening that summer during a spectacular Menemsha sunset, which was enjoyed by all attendees. His nephew Jesse credits Uncle Dennis for teaching him how to fish, and they enjoyed their fishing excursions at Quansoo. Dennis also did some shellfishing in the waters of Vineyard Haven, and worked for the Tisbury fire and water departments.

When he hung up his oilskins for the last time, he retired to his home at Bernard Circle. He was an avid gardener, apparently a genetic trait from his great-grandfathers, who were Vineyard farmers. Both Dennis and Linda loved authentic Texas barbecue and good old-fashioned fried chicken. His niece Jennifer fondly remembers her uncle frying pancakes on the wood stove. Most notably, Dennis loved his cats. It was not unusual to see his furry felines in his truck heading to Menemsha.

If you met Dennis for the first time, you may have been intimidated by his stature; he was over 6 feet tall, with a husky build and hands as big as catcher’s mitts. He had a thick, bushy mane of hair, and usually sported a beard, mustache, or long sideburns; kind of a cross between Quint and Grizzly Adams. But he was a charmer, with sparkly blue eyes, puckish grin, and gentle manner. The term “gentle giant” comes to mind for many islanders. He was just a soft-spoken, kindhearted man.

Dennis is survived by his wife of 53 years, Linda; nieces Jennifer Basford of West Gardiner, Maine, and Sharon Spencer of Mashpee; nephews Jesse Steere III, and James and John Tripp, all from Oak Bluffs. Dennis also leaves behind many friends from near and far, and his fellow Island fishermen. Dennis’ ashes will return to Martha’s Vineyard at a future date to be laid to rest in the Norton family plot at the Oak Grove Cemetery in Vineyard Haven.

His extended family would like to thank Hospice of Martha’s Vineyard, especially Cheryl Enos, for their professional, loving care of Dennis during his illness. Linda Norton is currently living in Maine, near her niece. If you would like to send her a cheery or funny card, the address is Memory Care Facility, Woodlands Senior Living, 152 Winthrop St., Hallowell, ME 04347.