Robert L. Hammett (Bob) of East Chop and Manchester-by-the-Sea died on June 1, 2021, after a brief illness, surrounded by family. He was 92 years old. 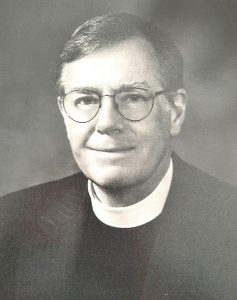 Born in Brooklyn, N.Y., on March 29, 1929, to John Reynolds Hammett and Margaret Mahin Hammett, Bob grew up on Long Island, in Garden City. While growing up he was very active in the Cathedral of the Incarnation. He graduated from Garden City High School in 1947, and attended Wesleyan College, where he enjoyed being a member of  Alpha Chi Rho fraternity, and received a B.A. in history in 1951. Bob continued his education in Alexandria, Va., obtaining a master’s of divinity from Virginia Seminary in 1954. Following his ordination, he moved to Darien, Conn., and took a post as assistant rector at St. Luke’s Parish.

In 1956, he met Sally Vickery, one of the parishioners, and they were married on Sept. 28, 1957. During his tenure at St. Luke’s, Bob contributed to the development of their new church school curriculum, before moving on to be rector of  Christ Church in Sharon, Conn., in 1958.

While in Sharon, Bob and Sally made many lifelong friends. Bob answered the bishop’s call to become involved with the civil rights movement. He set up a local group to discuss and advocate, which culminated in Bob boarding a train and marching on Washington with Dr. Martin Luther King Jr., and hearing the “I Have a Dream” speech. Bob and Sally also welcomed their first two children, Rob and Lee, during their stay in Sharon.

In 1962, they decided to purchase a house on Martha’s Vineyard in Oak Bluffs, as a place to put down summer roots. Located on East Chop, the house overlooked the Sound and was a place of many fond times and memories for three generations of Hammetts. Sitting on the porch reading was one of Bob’s favorite pastimes. He also enjoyed a good game of chess with his grandchildren, and could often be found with a paintbrush and easel, painting the lighthouse, the family house, and many other familiar Island scenes. His art could always be found at the annual Summer Art Show at the Tabernacle in the Campgrounds.

In 1966 Bob took a position at Emma Willard School, where he taught religion and served as the school chaplain. During his tenure there, he and Sally welcomed their third child, Whitney. While at Emma Willard, Bob traveled to England on a Mellon grant, studying early childhood education, and subsequently was instrumental in the creation of the Emma Willard Children’s School in 1972. He was the director of the preschool for 3- and 4-year-olds, which added kindergarten in 1973. Many more lifelong friends, faculty and students, came into Bob’s life during this time.

In 1975, Bob took over as rector at St. George’s Episcopal Church in Middlebury, Conn., assisting with their children’s school and also taking part in art shows. Following that, Bob and Sally and family moved to Needham. Bob served as rector of St. John’s Parish in Newtonville from 1981 to 1993. Bob was very involved in establishing a greater congregation which included many young people, assisting with Sunday school curriculum, and many diocese projects and activities.

In the ’80s and ’90s, as Bob and Sally loved to travel, they did a few “parish exchanges,” spending time in England preaching and touring. They also enjoyed visiting Europe and Israel with friends from their Sharon days. He and Sally always celebrated New Year’s on Cape Cod with the same group of wonderful friends every year.

Sally and Bob moved to the Vineyard year-round in 1994 after Bob’s retirement, moving Sally’s home-based business, Student Tours, with them. Bob kept himself busy assisting with childcare for his granddaughter, Rilla, and later he got involved with Havenside Corporation, an affordable living complex for island elders. He served as president of the board for many years, and he was honored with a building named after him in their complex.

In the 1990s, Bob also was involved with the project to build a new library in Vineyard Haven. He worked hard on their fundraising and planning committee, was president of their board, and was affiliated with the library through the late ’90s and into the 2000s.

In his later years, Bob and Sally moved off-island to be closer to his younger son, Whitney, and his family, living in West Yarmouth and later Manchester-by-the-Sea. Bob enjoyed his grandchildren, whether they were living next door or descending on the house at East Chop for the summer. He always enjoyed their conversations, and watching their tennis matches and school sporting events.

Bob’s spirituality touched so many lives. Deeply thoughtful, kind, and unconditionally accepting, Bob was a man who was sought after. His peaceful demeanor enabled those in need to come to him for help, which so many did. His true depth of listening, along with a wonderfully succinct sense of humor, made for many a great conversation.

Bob leaves behind his three children and their families: Robert and Deborah Hammett, and their daughters, Rilla and Emily; Lee Hammett Peterson and her two children and grandchild, Gretchen Anstett, Douglas Peterson, and Sarah Anstett; and Whitney and Allison Hammett and their sons, Noah, Eli, and Walker. He also leaves behind a niece, Polly Davis, and a nephew, Tim Davis. He was predeceased by his brother John Reynolds Hammett, and his loving wife of 63 years, Sarah Vickery Hammett.