This year marks the 25th anniversary of Featherstone Center for the Arts, located on the old Stevens family farm in Oak Bluffs. It has grown and been renovated over the years, most recently in 2017 as it opened the beautiful barn that contains the Francine Kelly Gallery, named for its former executive director, and current director Ann Smith’s mother. If the familial connection between the former and current director is worth noting, it’s also worth mentioning that “connection” is what this art center is all about. The Local talked to Ann Smith and director of development Posie Haeger about Featherstone’s history, and what makes it such a beloved art center for the Island community.

“Twenty-five years marks the number of years we’ve been on this campus,” Smith explained. Originally called Meetinghouse Center for the Arts, a small group of artists and art enthusiasts moved around from place to place before purchasing the farm and land where it is now. The various buildings on the property served as classrooms and a pottery studio, and the Stevens family home would become the main gallery.

“All of our board members and volunteers helped to transform these spaces, which are fairly rustic, and we have lived happily with that model for a number of years,” Smith explained. “Part of our capital campaign and dream when we celebrated the 20th anniversary was that we started to think about these buildings, really focused on the fact that we wanted to enhance the learning experience for our students, and the exhibit space for our artists and guests.”

Renovations were completed in 2017, with fresh spaces for painting and drawing, a new pottery and jewelry-making studio, and the open barn where artists’ exhibits fill the walls and the rest of the space. “We opened those buildings in July and August of 2017; this marks our fourth full year in the new spaces, and we’re celebrating our 25th anniversary,” Smith said.

Even the logo for this anniversary year holds a strong connection — the artist who designed it, Sabrina Kuchta, grew up on the Island taking watercolor classes at Featherstone. She came back and worked as a summer art teacher, and now is a pottery teacher. “She was mentored and supported and came back to work professionally in her field — that’s what we’re most proud of,” Smith says.

“She was a camp instructor, and went from a student to a teacher and a ceramics instructor and an artist in our shows,” said Haeger. “There is the lifelong learning concept here, that there’s always opportunity for a creative experience … everyone can find a place here — from novice to professional.”

Featherstone makes an impact on the young and old alike, and is about to launch its summer art camp for children. The arts center hosted the Garden Gate Preschool this past year during the pandemic, so there were 3- to 5-year-olds in the space regularly. The nature curriculum was a perfect fit at Featherstone, Smith said, and the center provided creative space for the young ones and families.

Smith explained that like everyone else during the pandemic, the people at Featherstone had to find new ways to reach out to provide the art experiences everyone has become accustomed to. “Featherstone is very much a person-to-person community,” she says. “We had movies outside, and the fall was a beautiful opportunity to have art programs outdoors with family groupings at each table. Coral Shockey did a magnificent job providing art experiences when everyone was looking for something to do. The programs we offered were all sold out, and the demand was incredible. We were proud to do our part the best we could.”

Smith said they learned a lot from the COVID-19 experience, and they held as many safe outdoor events as they could last year, including movies shown on the grounds in collaboration with the M.V. Film Center’s Richard Paradise. He had originally screened movies at Featherstone years ago.

“It does feel really special that we came together again, because we curate all the art shows at the Film Center. It felt really special to have movies back; there were decades or so when it wasn’t in place. It was nice to rethink and collaborate,” Smith said.

She said they had no idea when COVID would end or what things would look like afterward, but they did know that musicians had limited opportunities to play live music. Featherstone hosted Musical Mondays for years, and they are supportive of Island musicians. “We support artists — and that includes musicians and writers and artists,” Smith said. “Figuring out a way to support the musicians was on our mind.”

Featherstone hosted outdoor concerts until the weather became too chilly, and there was a strong turnout for each performance. Tickets were purchased online in limited numbers, and folks waited eagerly before snapping them up. Featherstone split the profits 50/50 with Island musicians, using the same formula for movie screenings.

“There is so much joy for people when they sit outside for movies and music,” Haeger said, “and you feel a bit of normalcy. You’re in this beautiful setting outside, and you’re still having fun in a pandemic. Last year we reintroduced Musical Mondays, live music at Featherstone, and this works. We can sell the tickets online. This forced us to better manage the process and to be able to offer it in a more respectful way. There are takeaways from this challenging year.”

With last year and its virtual and outdoor events somewhat in the rearview mirror, Featherstone is ready to have an event-filled summer season, live and in-person. There is an activity scheduled for nearly every day of the week, along with all the exhibits and special events. The number of students in the classrooms at Featherstone will remain at a safe number for now, but all the classes are up and running.

“In-person adult classes are in full swing,” Smith said. “June 21 was the first day of summer art camp, one of the most popular on the Island. We’re still limited in capacity, and the kids will be fully masked — they’ll spend a lot of time outdoors. Monday night, June 28, will be our first outdoor Musical Monday, Serendipity will play from 6:30 to 8. We’ll have the Tuesday Photographers Salon hosted by Michael Johnson at 7 pm. Wednesday evenings around 8:15 or 8:30 there is our partnership with Richard Paradise to offer outdoor movies — all types of movies, Richard’s choice. There’s the Thursday night jazz series, not all Thursday nights, but some. And on Fridays starting June 25, something very special is that we will host Johnny Hoy and the Bluefish almost all summer long, and for those few Fridays they can’t play, we’ll have additional bands from 6:30 to 8 pm.”

Special events include the current collaborative exhibit with the Vineyard Conservation Society. In July there will be a pop-up of A Gallery with Tanya Augoustinos, and a curated show with Rich Michelson titled “From Caldecott to Coretta Scott: Awardwinning Black Illustrators” from August 8 to Sept. 6. That exhibit will feature Ezra Jack Keats, Diane and Leo Dillon, Pat Cummings, Jerry Pinkney, Ekua Holmes, E.B. Lewis, Brian Pinkney, Eric Velasquez, and Bryan Collier. Then there’s the collaborative Islanders Write event with The MVTimes, Sept. 17 to 19, and poet Billy Collins arrives two weeks later.

Smith’s personal favorite, the Potters Bowl, is set for fall this year. “All the ceramic artists make beautiful bowls, and we lay them out on tables,” Smith describes the event. “There are 300-plus bowls. People stand in line to pick their favorite bowl, and then in the past we’ve served soup, bread, and dessert, and we have a community meal together. We’re changing it up a little, but we’ll still have beautiful bowls. We will provide individually wrapped things, and visitors will still be able to support Featherstone and the arts. I just love that when we have the long farm tables, visitors are strangers and by the end of the meal they’re friends.”

For more information and the upcoming schedule of events, visit featherstoneforthearts.org, and watch for them on social media on Facebook and @featherstonecenterforthearts on Instagram. Featherstone is open seven days a week, noon to 4 pm, with extended hours for special events. 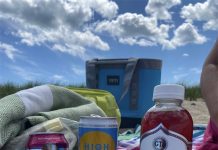 What’s in your cooler?