Every Tuesday when I was growing up, my dad would make his homemade mac and cheese. For this reason alone, Tuesdays became my favorite day of the week. There were always two different shapes of pasta, and a flavor combination that I had never tasted before. In reality, this was his special combination of frozen Stouffer’s and boxed Annie’s mac and cheese. Nonetheless, it was still a delicious, comforting meal.

Unfortunately, the cheese part of all of this doesn’t quite fit into my sister Susan’s new vegan lifestyle. So we turned to the greatest resource available to us to find a solution: TikTok. There were surprisingly a lot of vegan options for cheese sauce, many of them nut-based — cashews, almonds, or pine nuts. We tried those, and they all turned out quite well, but we were looking for something new. As I was scrolling for options, I came across a page called Gathered Nutrition, a health food blog started by Mia Zarlengo. I did some stalking of her page, and found that she did, in fact, have a recipe for a mac and cheese with a cauliflower base. So we had to try it.

First, we melted the butter in a pan and threw in the onion and garlic until the onions were translucent. Then, we put in the head of cauliflower, veggie broth, and the rest of the ingredients into the pan and let them simmer until the cauliflower was fork-tender, so about 10 to 12 minutes.

While the cauliflower was cooking, we boiled the pasta for about 3 minutes shorter than the intended cooking time.

After the cauliflower was done, we had the luxury of mixing the contents together with an immersion blender, but you can just as easily pour it into a regular blender and combine them that way.

We put the pasta into a baking dish, poured the sauce over, stirred, and popped it into the oven at 350° for 15 minutes.

Try out this recipe next Tuesday, or any day of the week! 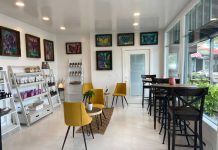 Not your average tea shop 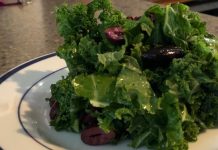