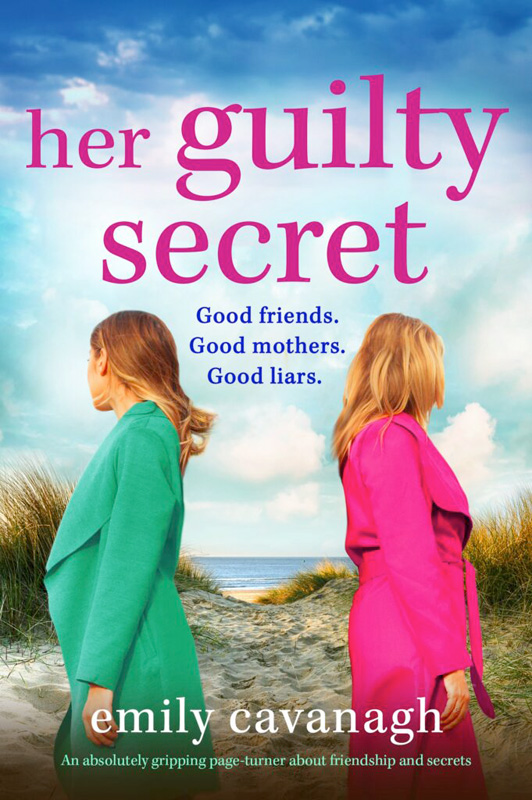 Maintaining a relationship with a close friend can be difficult, but try keeping even-keeled in a group of four. At the heart of Emily Cavanagh’s new book, “Her Guilty Secret,” are the questions, Can you go back again? And do you really want to? Although Cavanagh’s four women in the book became best friends during freshman year in college, more than 20 years have passed, and their paths have diverged. But as the group comes together for a long weekend getaway at the palatial Cape Cod home of Elise, the past and present intertwine.

In fact, there is a lot of intertwining throughout. Cavanagh, a resident of Oak Bluffs, creates a cat’s-cradle structure. We are inside the head of each woman in alternating chapters. The beginning ones set up Elise’s, Ada’s, Ivy’s, and Libby’s backstory, all of which include children and relationships, none of which are easy or ideal. Cavanagh’s ability to fully realize her characters allows us to keep the details of each woman’s life in mind as the tale unfolds. When the group comes together, Cavanaugh skillfully starts each successive chapter with a short text and/or social media posting from the woman’s partner, husband, or child, which helps keep everyone’s backstory straight.

Interestingly, she shares, “I’ve never been much of a plotter, and so I wasn’t sure who each of these women were or where their storylines would end up until I wrote them. I do tend to do a rough character sketch early in the writing process. This helps me to develop my characters and keep track of them. However, what I start with and how the character ends up are often very different.”

The story continually shifts between their lives at college and the initial intricate interrelationships with the current undertones occurring during the weekend together. Ivy, the hothead of the group (although they can all be touchy), sets the stage perfectly early in the book: “It was Elise who’d insisted on the weekend, desperate to hold the group together, when the rest of them would have happily drifted off into their separate corners of adulthood … Still, she couldn’t imagine not going … Being with them was like coming home, with all the complications that came with family.”

Unlike family, though, the bonds of friendship can be somewhat tenuous. It is further complicated by the fact that each woman is carrying her own secret or secrets that she is reluctant to share. As the story develops, we see what happens as they release their secrets to the others, sometimes with unanticipated results. A few are bombshells that keep sabotaging the dreamy idyllic retreat.

“The weekend was inspired by a real-life girls’ weekend that I had several years ago with several friends on the Island,” Cavanagh says. “Our weekend ended with a trip to the ER when one of my friends threw out her back (we later found out she was pregnant!), and this planted the seed of a girls’ weekend that didn’t go as planned. During the writing process, particularly when writing some of the food scenes, I found myself longing for a weekend away with friends in a beautiful location. The digital communication at the start of each chapter also resembles an endless text thread I have with this same group of friends.”

A through-theme in the book is the nature of love. Among the women, there are resentments and ancient squabbles, sprinkled with moments of tender connection and love. But love for one’s partner, and particularly love as a mother and the intense relationship one has with one’s children — whether a baby, adolescent, or teenager — also comes across.

“Her Guilty Secret: Good Friends. Good Mothers. Good Liars” is a juicy tale that easily unfolds, and makes for a getaway of our own.

“Her Guilty Secret” by Emily Cavanagh. Available online and at bookstores. Cavanagh will speak at an Oak Bluffs library Zoom event on July 15, at 7 pm. Visit oakbluffslibrary.org/event/author-talk-emily-cavanagh/.