Elizabeth Gale Cottle (“Betty”) passed away peacefully at her home in West Tisbury in the early morning of Sunday, June 13, 2021. She was predeceased by her beloved husband, Ed Cottle. They were married for 67 years. 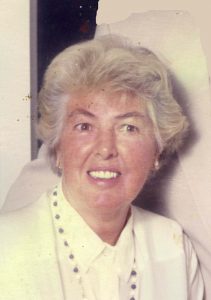 Betty was born in Oak Bluffs on Oct. 24, 1929, the daughter of Allen and Mary Gale. She grew up in Tisbury, and spent her adult life living in West Tisbury. Betty was an Island girl, through and through. Betty would often say that she had the best childhood. She loved to tell stories of roaming around West Chop, picking flowers before the summer people arrived. Walking to Bayside and jumping off the pier. Meeting her friends under the streetlights to play, or go to the movies. She would tell how the streets would be closed so the kids could go sledding.

Betty attended the Tisbury School for grades 1 through 12. She really enjoyed school; she was very social, an excellent student, and quite athletic. She stayed close to many of her classmates (Shirley, Alden, Herb, Joann, and Tina, to name a few). She also hosted a few class reunions. After high school, Betty was very proud of attending Mount Ida Junior College, and then with Shirley, she worked and rented a place in Hyannis. Before long, the Island started to call her home.

Once she was back on the Island, she worked for the telephone company, and fell in love with an up-Island boy named Ed Cottle. They were married on Sept. 15, 1951. In most families in the ’50s and ’60s, it was common for the moms to focus on raising the kids and taking care of the house, while the dads went to work. Mom would usually start the day by calling up the stairs to us kids, “It’s time to rise and shine!”
Betty didn’t run her home with lots of rules and curfews (although she did have a strict no-swearing policy, and she had a cowbell that could be heard for miles — when she rang that bell, we all knew it was time to head for home). Instead of rules, I believe she tried to instill in us life lessons, like “Do unto others as you would like done to you,” “Kindness matters,” “Do the best that you can,” and, “If you don’t have anything nice to say, don’t say anything at all.”

While Betty was raising five children and helping Ed with the lumberyard, she was also very active in the community. She was on the school committee, she helped organize and announce at the local horse shows, she was on the board at the hospital, she counted votes at the West Tisbury polls. Betty belonged to the M.V. Garden Club, the Antiques Club, and a bridge club. She also had many personal interests; she was accomplished at needlepoint and knitting, loved to read, to grow beautiful flowers, the holidays, birdwatching, decorating the house. She did extensive research on the genealogy of her family. She enjoyed playing tennis, golf, cards, and dominoes, or simply just driving by the beach to look at the water and smell the salt air.

Betty often talked about her desire to travel, and after the kids were grown, she was able to fulfill her dream. She enjoyed a cross-country trip with Ed, and many trips to Boothbay, Maine, and North Conway, N.H.; she loved her winter trips to Florida. She traveled extensively through Europe, Scotland, Holland, Italy, and Wales. She visited the Azores, Alazka, and Canada. After returning home, she would get her pictures developed, gather ticket stubs and travel brochures, and create a scrapbook of every trip.

However you knew her, Mom, friend, sister, Mrs. Cottle, Aunt, Betty, Great-Grammie, Great-Aunt, Elizabeth, Bet — she will be remembered for her wonderful smile, her positive attitude, and her ability to always see the good in everything. She also had a special gift of making everyone around her feel wanted, loved, and important.
She will be forever missed by her children: Jill Walpole, her husband Randy, and their daughter Kate; Ed Cottle, his wife Inez, and Ed’s children Sarah, Jen, Rachel, and Ed III; Janet, her husband Glenn, and their children Keith, Jon, and Elizabeth; Amy, her husband Gary, and their children Dan, Kevin, and Mary; Alan, and his wife Deb. She is also survived by her brother Robert, and his wife Rita; and by many great-grandchildren, nieces, nephews, cousins, and friends. She was predeceased by her husband, Ed; her parents, Allen and Mary; and her brother Richard.