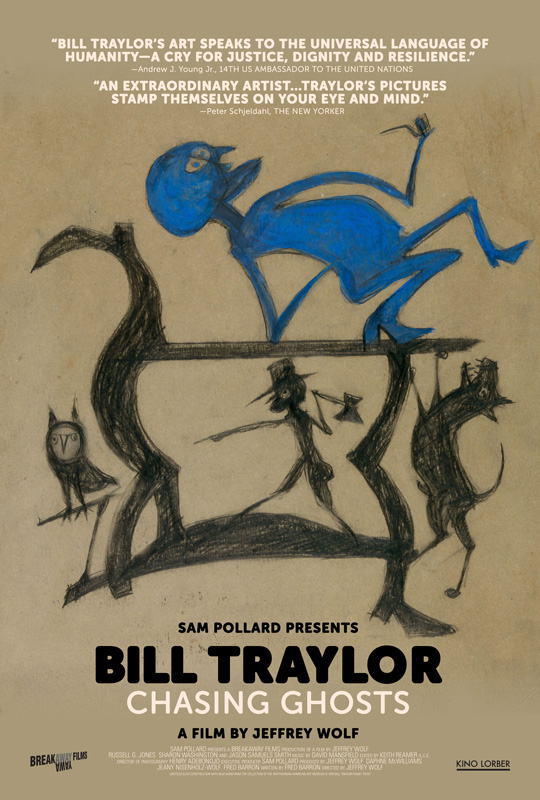 “Bill Traylor: Chasing Ghosts,” an excellent prelude to the M.V. Film Center’s upcoming Documentary Festival, comes to the Film Center on Sunday, July 25. It includes a post-film Q and A with director Jeffrey Wolf and writer Fred Barron. This insightful documentary tells the story of artist Bill Traylor, who lived and created his work in Montgomery, Ala.

The film employs many innovative techniques to describe Traylor’s life, beginning with a tap-dancing sequence by Jason Samuels Smith. Traylor was born in 1853, when slavery still existed. He didn’t begin drawing and painting until he was in his 80s, after some 40 years of farming as a sharecropper. Traylor was supposedly married more than once, and fathered a number of children with his wives and with other women. Although he was said to have married a woman named Larissa, Laura Williams was listed as his common-law wife.

Not much is known about his childhood and early life, although his father was a bricklayer, and the family kept in contact with white plantation owners the Traylors, taking their name. Once he began to produce art, his work reflected the African American storytelling tradition.

Traylor drew on pieces of scrap paper, incorporating his images into the irregularities of its stains, tears, and marks, and his work has been described by one critic as having “a beautiful simplicity.” His art reflects a magical, enchanted realm that includes primitive images of dogs, snakes, and other animals; houses and other constructions, such as an elaborate diving platform; and men and women, often arguing. His work explored mystical memories — as said by critic and musician Greg Tate — of the world of Reconstruction and the Jim Crow era he lived in. Hence the film’s title, “Chasing Ghosts.” It was characterized by a sense of rhythm and an intentional lack of symmetry. One example of how his work evolved comes in the film’s recounting of how Traylor’s use of the color on characters’ legs reflected the sadness of blues music.

In his later years, he worked on Monroe Street, sitting in the Black section of Montgomery outside a pool hall, and sleeping on the floor in a nearby funeral home. Poor health led to amputation of a leg, which limited his mobility. Although large numbers of his paintings were discarded, the film is filled with hundreds of examples of his work, which wasn’t appreciated until many years after his death in 1949. Without making direct references to Traylor, the words of Zora Neale Hurston and Langston Hughes nevertheless enrich the story of his life and work. Another descriptive element comes from actors Sharon Washington and Russell G. Jones.

As artist Radcliffe Bailey says, “I see his work as a pill for the pain. It remains powerful medicine in today’s world.”

Information and tickets for “Bill Traylor: Chasing Ghosts” and other Film Center films are available at mvfilmsociety.com.