Pauline Friedrichs (“Polly”), 92, beloved matriarch and community member at the First Unitarian Society of Exeter, at Riverwoods in Exeter, and of the world at large, died surrounded by loved ones at her home in Exeter, N.H., on July 14, 2021. She will be most remembered for her quilt art, generosity, steadfastness, and dedication to social justice rooted in spirituality. She was ahead of her time, and a model for future generations, emailing, Instagramming, and Zooming in her advanced years. 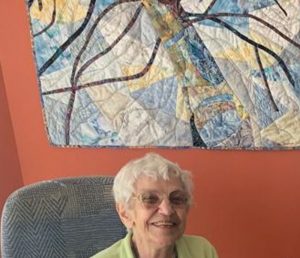 Polly was born on Nov. 16, 1928, in Whitewater, Wisc., and met her husband of 62 years, Williams College Professor Emeritus Bob Friedrichs, at the University of Wisconsin. She received a bachelor’s in home economics at UW Madison, and later, after several years of teaching in Williamstown, received her master’s in nutrition in 1978, with a thesis about the decline in healthy diets in the U.S. Her always fresh homemade bread and Christmas cookies were family favorites. From 1963-64, Polly and Bob lived outside Tokyo with two small children, before traveling throughout Eurasia while Polly was seven months’ pregnant with their third child. The couple also loved living in Cambridge, England, during 1970-71 and 1977-78.

For more than 30 years they spent their summers on East Chop in Oak Bluffs, where Polly would walk the bluff every day at dawn, rain or shine. A trip to the USSR with her Congregationalist church through the organization Bridges for Peace also particularly influenced Polly.

She and Bob helped with efforts to expose racist redlining practices, and she volunteered for the League of Women Voters and the program A Better Chance in the Williamstown school district. Polly was also an antiwar protestor and LGBTQ advocate. She stayed informed through her daily cover-to-cover read of the New York Times, and was always active in her community.

She was preceded in death by her brother Arthur Carlson, her sister-cousin Floy Dalton, and her husband Bob. She is survived by her companion of the past decade, Bill King, her three children, Carl in Virginia, Paul in Exeter, and Robin Moriarty in West Tisbury; and her eight grandchildren and four great-grandchildren: Sarah, Dylan, and Gray Waldman, also of West Tisbury, Anna, Ella, and Nell Bergholz, and Emily, Peter, Lief, Drew, Will, and Liz Friedrichs.

A memorial service will be held later in September at the UU church in Exeter, and will be announced to the Riverwoods and UU community, or you may write to the family at efriedrichs@elevationweb.org to receive details once available. In lieu of flowers, please send in memoriam donations to Médecins Sans Frontières or Amnesty International.