Lively crowds and lively musical performances were on full display during Beach Road Weekend 350 from Friday to Sunday in Veterans Memorial Park in Tisbury. American jam band Moe. performed on the first night of the music festival and rock band Tedeschi Trucks Band played on Saturday and Sunday.

Large screens were used to better show the bands’ performances to the general audience section. At The Loft in Oak Bluffs, a pre-party and an after show were held. Pink Talking Fish performed during the pre-party, while Marble Eyes played at the after show.

Moe. kicked off their performance immediately at 6 pm while the Tedeschi Trucks began with a short speech by the festival’s organizer, Adam Epstein, saying all of those involved in organizing the event “worked really hard.” The speech was followed by the performance of the Tedeschi Trucks. “Are you all ready to party?” Susan Tedeschi asked the excited crowd.

Attendees of the concert liked what they saw with the festival. For Lauren Adams, the Moe. performance was her first event after COVID restrictions were loosened. “It’s great. It’s a lovely night and a lovely concert.” Concert goers watching the Tedeschi Trucks agreed. “It’s very good and I’m enjoying it quite a lot,” said Michael Roberts, who has followed the band for many years. “We have a great band and weather. What more can you ask for?” “I think it’s great. It’s a great night and a great band,” said Maria Melley. “The seating is spaced out so it’s a little different than usual, but it’s a great crowd.”

Adam Epstein, the show’s promoter, said people’s safety came before profit for the festival. His team made a “comprehensive plan” for COVID before proposing Beach Road Weekend to the Tisbury select board. Epstein had already run events at venues like the Yarmouth Drive-in with COVID safety in mind and worked with the board of health to ensure safety.

Even with his experience in Yarmouth, there was still a lot of uncertainty going into 2021. While Beach Road Weekend was already cleared for an event by the select board, Epstein decided in January to cancel the event. However, once Gov. Charlie Baker lifted most restrictions in Massachusetts, Epstein thought it would be fine to go ahead with a more “modest” music event for July. “It doesn’t have to be big to be special,” said Epstein.

Planning the event with COVID still around required those involved in organizing the event — Epstein and the town —  to be on “the same page” to make sure people would be safe during the event.

Beach Road Weekend occurred during Tisbury’s 350th anniversary month. The festival was a way for Epstein to “honor” the town he loves. Epstein said Tisbury has “bounced back” from difficult situations before and he is proud of it. Epstein is a resident of the town and said he has invested in Tisbury, both in its people and the local businesses.

Epstein hopes events like Beach Road Weekend can attract new people to Martha’s Vineyard, especially those with a youthful and new energy. Epstein “fell in love” with the Island after he visited it during college. “I want to attract new people and show them what I love about it, too,” he said.

In the days leading up to the festival, Beach Road Weekend 2022’s lineup was announced. Epstein said they are planning it like a pre-COVID event, but will change or even “cancel the event if there’s even a slight chance of people’s safety being in jeopardy.” Epstein said the 13 month early announcement will help people better prepare for the trip to the Island. Beach Road Weekend is already attracting attention. On Sunday, 300 people were lined up at the Stone Bank in Tisbury to purchase tickets.

“We try to create an experience that has a rich, musical flavor but one that appeals to both Islanders and people on the Cape who want to spend a day on the Vineyard,” said Epstein. 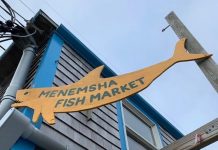